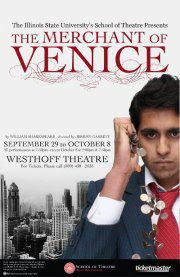 I am not among those put off by setting Shakespeare in other times and places than, say, Elizabethan England. So if you want to put your "Tempest" on the moon in 2525, or your "Much Ado" in the Wild Wild West in 1885, I'm down with that. As long as you make it work.

When Joshua Sobol directed "The Merchant of Venice" at the Illinois Shakespeare Festival nine years ago, he set the play in Mussolini's Italy, with the Duke becoming Il Duce, Shylock plotting desperately to keep his daughter safe, and Portia and Antonio both passing as genders they were not in order to get by in dangerous Fascist times. Sobol didn't change a word of the text, yet he made this difficult play seem totally and completely new. He also made it work.

ISU's Jeremy Garrett chooses a setting not too far from Sobol's with his "Merchant of Venice," which seems to be teetering in the false prosperity of the late 1920s, just before the New York Stock Market Crash in 1929 plunged the world into the Great Depression. Portia is fashionable and lovely in an emerald green slipper satin gown, Antonio (the merchant) is dapper in a bowler hat, and servants twirl in and out to the tune of "Puttin' on the Ritz."

Program notes from the dramaturg (Andrew Rogalny, Jr, who also plays Antonio) tell us that this "Merchant" intends to show the gap between the moneyed classes and the have-nots, with the former dithering around when they should've paid attention to the poverty and misery rising on every side. Rogalny writes, "Their extreme goals turn them into a group of people who are so selfish and blind that they don't even notice that their world is decaying and falling apart all around them." If you are like me, you are thinking that that description sounds a lot more like "My Man Godfrey" than "The Merchant of Venice," especially given the slipper satin and blithe insouciance.

Still, it's an interesting idea, and it does fit the general notion of commerce behind Antonio, the merchant in "Merchant," who borrows cash from Shylock, the Jewish money-lender, and then can't pay it back, which means he is supposed to forfeit "a pound of flesh." It also seems right when we see pretty Portia treating her suitors shabbily or Bassanio recklessly using his friend's money to woo the girl or Antonio's pals casually throwing off insults and epithets. They're wealthy, white and Christian, so the world can't touch them, right? But then... As time wears on, the petty rich people acting all petty begins to overwhelm the real story, and in general, we lose focus on Shylock except for his big "Hath not a Jew eyes?" speech. By the time we get to the pivotal trial (wherein Shylock asks for the pound of flesh he's owed), there's no reason that this Portia would show up dressed as a boy and wow the court.

It also means that 90% of the play -- when the merchant and his pals are fooling around and Bassanio is wooing Portia -- is simply there to show that these people are vapid and silly before the real world intrudes at the very end. But we don't want to spend 90% of our time joking around with the Mean Kids. Or at least I don't. And the coup de theatre ending, when the veil is drawn back and we see reality, is more jarring than dramatically satisfying.

That kind of socko ending has been fashionable for awhile, getting tacked onto plays like "Les Liaisons Dangereuses," with a guillotine at the end to underline the precarious position of the aristos, or "An Inspector Calls" and "Indiscretions," where the entire set falls down, or even newer versions of "Cabaret," which include naked, shivering prisoners lining up for the showers at a death camp as the final image. But those stage pictures fit those plays. I'm not convinced that the picture of huddled masses yearning to breathe free adds anything to "The Merchant of Venice." And I'm certainly not behind adding news-announcer voice-overs or add-libbed chit chat to shoehorn Shakespeare into 1929*.

In the end, Garrett deserves credit for going all out with his idea and staying consistent to his vision, even if he can't quite pull it off. It makes for vivid performances, with Rogalny as a precise, suppressed Antonio, clearly harboring a crush on his BFF Bassanio, Alex Kostner's Bassanio all boyish charm and dimples and Claire Ford looking absolutely fabulous in Portia's emerald green gown and Charlie Chaplin-ish when she heads to court dressed as a man. As Shylock, Owais Ahmed makes the most of his big speech and draws our sympathy in court.

THE MERCHANT OF VENICE
By William Shakespeare

Running time: 2:30, with one 15-minute intermission

*I was reminded of the legend about the 1929 film version of "The Taming of the Shrew" that supposedly had a credit at the end that said: "By William Shakespeare, with additional dialogue by Samuel Taylor."
Posted by JulieK at 1:42 PM