Trust Me: You Gotta Get a Copy of "Sweet Bye and Bye" 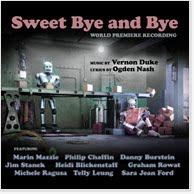 My friend Jon sent me a copy of "Sweet Bye and Bye," the new PS Classics release, a while ago, and I have been listening to it and loving it ever since, planning to write about it here and share my love, but somehow, I keep putting it off. Is it because I don't want to share? Because I fear not being able to capture the delight and charm in this particular recording? Still not sure. But I am trying to be a stable adult and get over it, just because this is one cd that definitely needs to be out there. Everyone who loves musical theater and the history of musical theater needs to give it a listen, read the liner notes and take in in the singular phenomenon that is "Sweet Bye and Bye."

I mentioned the liner notes right up front because Tommy Krasker, mastermind behind PS Classics, has written especially good notes for this cd. Krasker tells the whole crazy story of how this misguided musical came into existence, as a collaboration among the unlikely quartet of S.J. Perelman, the biting humorist and author who was best known for short New Yorker pieces; Al Hirschfeld, AKA "The Line King," the famous caricaturist who captured generations of Broadway performers in his drawings; poet and wit Ogden Nash; and Vernon Duke, the Russian composer who wrote such hits as "April in Paris" and "Taking a Chance on Love" as well as the scores for about 20 Broadway shows.

Perelman and Hirschfeld started first on the libretto side of the equation, coming up with an idea for a musical set in the future, when a time capsule from the 1939 New York World's Fair is opened. Inside the time capsule is a document giving control of the Futurosy candy empire to a lowly tree surgeon named Solomon Bundy. Their comic targets were the future they imagined, the idea of an unassuming guy thrust into the spotlight, and the terrible people at the top of the heap, the movers and shakers, especially the ones running corporations.

The score, with Duke's lovely music and Nash's pithy lyrics, was full of all kinds of nifty songs that defined Solomon and his confusion in dealing with a world full of change, the lovely Diana Janeway, a savvy woman who specializes in making over men who want to make it to the top, and villainous Egon Pope, the current GM at Futurosy. But that score didn't fit the Perelman-and-Hirschfeld slapstick-and-gags book. At all.

If the fact that the book didn't fit the score at all wasn't enough of a problem, casting certainly was. The first person cast as Solomon Bundy, a man named Gene Sheldon, was more of a vaudeville comic than an actor, and the score took even more hits to accommodate his less-than-brilliant talents. And Pat Kirkwood, the actress cast as Diana, had a nervous breakdown during the third week of rehearsals, trying to kill herself and getting shipped off to a mental institution. (The official report was that she withdrew due to the flu.)

The more suitable Dolores Gray took over as Diana, solving one problem, but there was still the issue of the wrong man playing Solomon. On opening night at the first out-of-town try-out in New Haven, Sheldon apparently decided to abandon the book altogether, instead performing some of his (silent) vaudeville shtick, including pretending to sew his fingers together. When Sheldon made his first exit, Krasker tells us that an irate S.J. Perelman threw the hapless comic into a brick wall, knocking him cold. This time, the official story was an attack of appendicitis. Sheldon was replaced by the stage manager, carrying the script, for the rest of the New Haven run.

By the time they got to Philadelphia, they had another Solomon Bundy in Erik Rhodes, who you may remember as Tonetti, the Italian co-respondent in "The Gay Divorcee," who delivered the infamous line, "Your wife, she is safe with Tonetti -- he prefer spaghetti." He was certainly better than Sheldon, but he still wasn't very good, and there were major holes in the show. Which meant that massive changes to the book and score -- tossing out songs, tossing out scenes, reassigning songs, sticking in new scenes -- just kept coming. Finally, with changes on top of changes and the script and score in tatters, the producer pulled the plug. No New York for "Sweet Bye and Bye."

Against all that drama, the actual story inside "Sweet Bye and Bye" pales by comparison, even if there is all kinds of satire and snap in this Gint/Candide tale of a good guy (Solomon Bundy) corrupted by power, set loose on the world, accosted by space tramps, venal executives and violent Eskimos, and finally reuniting with the woman he loves. It's not the cleanest plotline in the world, but it is unique. If anybody revives this show (and I certainly hope somebody does), it would be even more entertaining to add all the confusion and craziness behind the scenes as a framing device. Or maybe not. How much revision can one libretto take?

In any event, Tommy Krasker found "Sweet Bye and Bye" and its many versions fascinating. He loved what of the score he could find, but had no orchestrations and had to trip through no less than eight versions of the script. That made restoring "Sweet Bye and Bye" more than just a challenge. As the years rolled by, Krasker took on that monumental task, hiring an orchestrator, acquiring permissions from all the right heirs and assigns, and piecing together a semi-coherent whole from all the different takes on a plot.

He ended up sticking to what Duke and Nash had come up with for the most part, and it actually does make sense, even if their robots-and-spaceliners vision of 2076 seems sweetly archaic. But Philip Chaffin makes Solomon Bundy sound wistful and adorable, Marin Mazzie is snazzy as the cynical Diana, and Danny Burstein brings down the house as the Ham of all Hams, Egon Pope.

The title song sets up the premise that we expect the future to solve all our problems, while Chaffin sounds warm and wistful on "Born Too Late," Bundy's lament about not really belonging in the modern world. Burstein's "Ham That I Am" is full of energy and humor, matched nicely by "Let's Be Young" (with Telly Leung, who appears on TV's "Glee" as a Warbler, at the forefront) and "It's Good," an anthem for hucksterism and con jobs, winningly performed by Chaffin and Jim Stanek as a futuristic hobo.

Still, I'd love to see "Sweet Bye and Bye" in a full-out production on stage, to get a look at what a scenic designer and costumer might do with this Future Tale and its handy candy factory. I sincerely doubt that anybody anywhere could put together a cast like the one Krasker did (including stars like John Cullum, Edward Hibbert, Rebecca Luker and Heidi Blickenstaff in small roles) but it would be fun to see if finally, once and for all, "Sweet Bye and Bye" could see the light of day.

You can buy "Sweet Bye and Bye" at PS Classics and form your own opinion. But in mine, this strange little piece of musical theater history needs to be heard.
Posted by JulieK at 5:29 PM