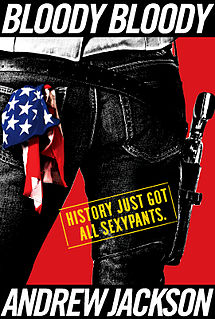 Urbana's Station Theatre is known for doing provocative theater, throwing caution to the four winds, and finding a way to put even big musicals inside their tiny space. Angels in America? They've done it. Assassins? Done it. West Side Story, complete with full choreography and all the requisite Jets and Sharks? Done it. Long Day's Journey Into Night? Done it twice, 25 years apart, with the same actors playing James and Mary Tyrone.

The member of the Celebration Company are at it again this week, with Michael Friedman's and Alex Timbers' Bloody Bloody Andrew Jackson, a controversial rock musical about... President Andrew Jackson! Not Andrew Johnson, the impeached one who followed Lincoln. We're talking Andrew Jackson, the possibly illiterate, hot-headed, duel-happy "man of the people" who came from the Tennessee frontier, became a war hero during the war of 1812, picked up the nickname "Old Hickory" because he looked like a tree (no, really, it was because he was such a hard guy, or "tough as hickory"), built a new political party and machine, and managed to tick off a whole lot of people left wounded and bleeding along his political path to the presidency. And that's how he got to be the 7th president of the United States.

Aside from all the controversy and destruction, he was involved in two Big Things during his presidency. He got rid of the monopolistic Second Bank of the United States and he came up with the idea to get rid of all the Native Americans, something called "Indian removal," which meant the U.S. government "bought" their tribal lands and forced them to move west, basically off the map. You can call it "ethnic cleansing," "genocide," or "Indian removal," but it resulted in death, disappearance, violence and 45,000 Native Americans pushed off their lands.

The musical, with music and lyrics by Friedman and the book by Timbers, who also directed the initial production, creates a raucous, outrageous Wild West Show with cowboys and hookers rallying around a rock star version of Andrew Jackson. Jackson has songs like "I'm So That Guy" when he decides to step up and push back Spanish, British and Native American incursions into what the U.S. considered its turf, and "Ten Little Indians" to talk about his plans to eradicate Native peoples. Like Jackson himself, the musical has spurred controversy over its treatment of Native issues.

For the Station, Bloody Bloody Andrew Jackson is directed by Mikel L. Matthews, Jr., and David Barkley provides musical direction. Barkley has a beautiful voice himself, as well as experience with presidential musicals. I still remember his stunning version of "Molasses to Rum" in a production of 1776 from the 90s.

Bloody Bloody Andrew Jackson opens with an 8 pm performance on January 17 and runs through February 2.  The Station also has an online reservation request form, which you can access here.
Posted by JulieK at 10:33 AM