SHAKESPEARE UNCOVERED Takes a Look Behind the Page 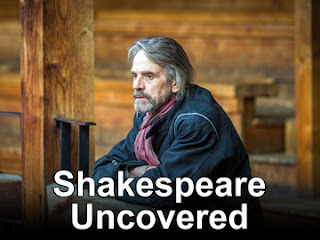 A new PBS series called Shakespeare Uncovered began last night, with episodes hosted by Ethan Hawke (on Macbeth) and Joely Richardson (on Twelfth Night and As You Like It). Both hosts talked to actors, directors and scholars to get at a better understanding of the plays, their characters and how they related to Shakespeare's life. I especially enjoyed Richardson taking a look at her mother, Vanessa Redgrave, performing Rosalind in As You Like It. It's lovely.

This is a six-part series, with the next two scheduled for Friday, February 1. Those two will be an examination of Richard II with Derek Jacobi (at 8 pm Central time) and a look at Henry IV and V with Jeremy Irons (at 9 pm).

Jacobi is an odd choice for this kind of show; he's a wonderful actor but he persists in believing that Shakespeare didn't write his own plays, which flies in the face of all the info from parts I and II of Shakespeare Uncovered about Shakespeare's stage twins relating to his owns twins, Judith and Hamnet, and other textual connections drawn within the programs to the actual Will Shakespeare in Stratford. I suppose that's why they didn't give Jacobi Hamlet (it's a biggie for the Oxfordians), but he bring up his Oxfordian beliefs in his discussion of Richard II.

Notes on this program tell us that Jacobi will work with actors on the Globe stage and give them a lesson on the Earl of Essex, a plot to topple Queen Elizabeth, and how Richard II and its author fit into that conspiracy. Better news is that this piece of Shakespeare Uncovered will show clips of Patrick Stewart and Ben Whishaw in an upcoming Great Performances version of Richard II.

Jeremy Irons, host of the 4th slice of Shakespeare Uncovered, has recently created controversy, as well, comparing Downton Abbey to a Ford Fiesta when he was doing press for Shakespeare Uncovered, and thereby incurring the wrath of Downton fans as well as the Ford Fiesta people. Irons's segment includes a visit to Agincourt to learn more about the history behind the events in the plays, and he will go behind the scenes of the new Great Performances adaptation where he plays Henry IV with Tom Hiddleston (Loki in The Avengers) as his son, Prince Hal, who becomes Henry V.

Parts V and VI of Shakespeare Uncovered air February 8, with David Tennant taking on Hamlet (including a visit to the gift shop at the Globe) and Trevor Nunn on The Tempest, a play he directed for the stage last year with Ralph Fiennes as Prospero.

You can find out more about all of these episodes, plus play What Shakespeare Character Are You? on the PBS site for Shakespeare Uncovered. (Psst... I'm Rosaline. Score!)
Posted by JulieK at 3:14 PM