MAD MEN Will Be Back April 7

The premiere date for Mad Men's 6th season has been a subject of much speculation since Season 5 took its curtain call back in June 2012. I'm a big fan of this spiffy period drama about the advertising men and women who once haunted Madison Avenue, so I've been eagerly awaiting news of its return.

And now we have it!

AMC has announced that Mad Men will be back April 7 with a special two-hour premiere, giving us a look at Don Draper and Company as they move into the latter part of the 60s. You can see from this promotional still that sideburns are in (see Vincent Kartheiser's Pete Campbell on the far right), some people are hanging onto earlier fashion trends (John Slattery's Roger Sterling and Jon Hamm's Don Draper are wearing small bow ties and cummerbunds, while Christina Hendricks' Joan Harris has a gown that doesn't exactly look like a flower child) and the alcohol and cigarettes are still free-flowing. 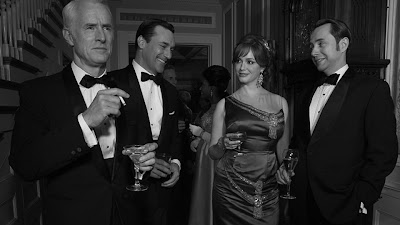 In this one, we can see that Miss Zou Bisou Bisou is down with the big hair 60s in the fashion of Sharon Tate, Sally, her flip and her white gloves are more Tricia Nixon, and Betty still exists. Oh, and she isn't fat anymore. But all the ladyfolk are still circling Don, of course. I could do without either Megan or Betty, so I'm a little sorry to see them. Sally, I love. You go, Little White Glove Girl. 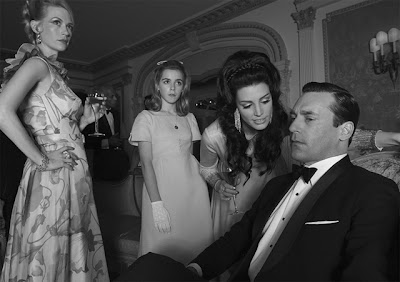 Although there haven't been a whole lot of spoilers yet for the new season, we do know that it will start in late 1967, that Peggy (Elisabeth Moss) is definitely back, even though she won't necessarily be at Don's agency, that Jon Hamm directed an episode, that the finale episode of Season 5 contains important info about where Season 6 will go, and that creator Matthew Weiner thinks "a lot has changed when the season opens up."

Let the speculation begin! And let April 7 (or some sneak peeks at the premiere episode) hurry up and get here!
Posted by JulieK at 5:06 PM