Community Players Out of the Gate Fast Announcing 2013-14 Season

Now that it's 2013, Community Players isn't wasting any time. Yesterday, they made their big 2013-14 announcement, cluing everyone in on what they'll be performing on Robinhood Lane through July 27, 2014.

What do they have planned? A challenging season, mixing stage classics with some spiffy new musicals.

When I saw the first two choices, I thought maybe they going to do a whole season of Plays Beginning with A. That might be fun, but for right now, they'll start with the musical Aida in July, 2013, and head on to Arsenic and Old Lace in September.

This Aida (as opposed to the Verdi opera) is a power ballad bonanza, with music by Elton John, lyrics by Tim Rice, and book by Linda Woolverton, Robert Falls, and David Henry Hwang. It's a love story about the transcendent connection between an Egyptian military man, one Radames, and a Nubian captive named Aida. On Broadway, Aida won four Tony Awards, including Best Musical Score and Best Performance by a Leading Actress for Heather Headley, who played Aida.

Arsenic and Old Lace is a totally different kettle of fish. This comedy classic, performed by countless theaters, schools and community organizations, has great roles -- Aunt Abby and Aunt Martha -- for ladies of a certain age. Mortimer Brewster's two aunts are lovely and sweet, providing both the lace and the arsenic, as it happens, knocking off old older gentlemen who stop by their parlor with poisoned elderberry wine. They're only doing it to be kind to these lonely souls, and also to provide "yellow fever" victims for their brother Teddy, who thinks he is Theodore Roosevelt, to bury in the basement, where he thinks he is digging the Panama Canal. It's dark humor and decidedly funny, as poor Mortimer gets put through the wringer by all the nonsense going on in the Brewster household. 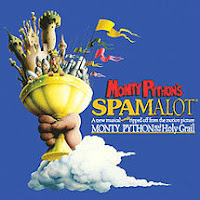 In November, Players will unveil Monty Python's Spamalot, the musical version of the film Monty Python and the Holy Grail that won the Tony for Best Musical on Broadway in 2005. Monty Python member Eric Idle wrote the book and the lyrics and contributed to the score with John Du Prez and Neil Innes. Spamalot is a decidedly irreverent retelling of  Arthurian legends, with a little Fish Slapping, some Laker Girls and Las Vegas style entertainment, as well as jokes at the expense of Broadway itself.

That will be followed by a radio play version of It's a Wonderful Life, in December, of course, and the drama The Diary of Anne Frank to start 2014. The original stage version of Anne Frank, adapted by Frances Goodrich and Albert Hackett from the diaries the young schoolgirl wrote while hiding out from the Nazis in an Amsterdam attic during World War II, played on Broadway in 1955. A new adaptation by Wendy Kesselman also came to Broadway, this time in 1997, with Natalie Portman in the title role. The newly adapted Diary of Anne Frank is scheduled for performances from January 17 to 26, 2014, at Community Players.

The March musical choice is Dolly Parton's 9 to 5: The Musical, the show IWU performed last semester. Dolly wrote the score, while Patricia Resnick contributed the book of this female empowerment musical that takes a leap back to the late 70s to show the comical side of revenge against a male chauvinist pig. Remember when we said "male chauvinist pig"? I do!

9 to 5 will be followed by Neil Simon's The Odd Couple, with performances from May 16 to 25. The Odd Couple is a perennial favorite, with the original stageplay, film and TV versions, scripts written for men and for women playing the mismatched roommates, and a 2002 updated Odd Couple (called Oscar and Felix: A New Look at the Odd Couple) that includes more current references. Which one is Community Players performing? We'll have to wait till we're a little closer to find out. (The image at right is from the film version, starring Jack Lemmon and Walter Matthau. A little bit of trivia: Matthau was also in the Broadway original, where he played Oscar opposite Art Carney's Felix.)

The last show of this ambitious season will be Shrek the Musical, a Broadway show about a sweet green ogre and the enchanted princess he falls in love with. Lots of fairytale humor in this one, with a prince who is not at all charming, exiled fairies and elves and Pinocchio, and a talking donkey who becomes Shrek's best pal. Jeanine Tesori wrote the music for Shrek the Musical, while playwright David Lindsay-Abaire contributed both the lyrics and the book. The wonderful Brian d'Arcy James and Sutton Foster played Shrek and his beloved Princess Fiona on Broadway. And Christopher Sieber, one of the original cast members of Spamalot, took on the diminutive Prince Farquaard, the bad guy in the mix.

For schedule details and audition dates for all these shows, check out the Facebook announcement from Community Players here.
Posted by JulieK at 12:37 PM