Keeping Up with Casting: MIDSUMMER NIGHT'S DREAM at ISU

To catch up... We've already talked about the casts for four of Illinois State University's upcoming shows, from Archibald MacLeish's J.B, opening February 21 in Westhoff Theatre, to Rodgers' and Hammerstein's Oklahoma, in the Center for the Performing Arts from February 22, Tales of the Lost Formicans, a play by Constance Congdon, starting March 28 in Centennial West 207, and The Adding Machine, a classic from Elmer Rice, with performances beginning April 5 in the CPA. If you want to see which actors are playing which roles in those plays, click on the link under the show titles just above. 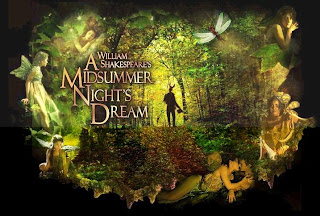 So what does that leave? Shakespeare, of course! A Midsummer Night's Dream is the last show of ISU's theatre season, taking the stage in Westhoff Theatre from April 11 to 20. Vanessa Stalling, the MFA directing candidate who worked on Jean Genet's The Maids last season, will direct this Midsummer for ISU.

Stallings has cast Devon Nimerfroh, memorable as Howard the salesman in Picnic and one of the onstage musicians in Mother Courage, as Theseus and Oberon, with Abby Vombrack, Mother Courage herself, opposite him as both Hippolyta and Titania.

Duke Theseus and his tempestuous Amazon bride-to-be, Hippolyta, form the framing device for the play. Their wedding offers an opportunity for aristocrats like the young Athenian lovers to gather as guests. It also gets the troupe of "mechanicals," regular working folk, together to attempt to put on a play in honor of the nuptials. The third plot thread in Midsummer involves a band of fairies and their king and queen, Oberon and Titania, who are up to some mischievous magical tricks in the same forest as the lovers and the mechanicals.

Nimerfroh and Vombrack will have more to do as Oberon and Titania, since their romantic battles create all sorts of havoc, what with misguided love potions mixing up the four lovers and Titania falling in love with Bottom, one of the actors in the amateur troupe, after he's been turned into a donkey by Puck, Oberon's right-hand fairy minion.

For ISU, Cydney Moody will step in as Puck, while Thomas Howie (who happens to be the son of Mike Howie, my very first editor at the Champaign New-Gazette when I started as a theater critic) will play Bottom, the amateur actor who falls afoul of Oberon, with Garrett Douglas, Andrew Piechota and Brandon Miller as his fellow mechnicals.

Elizabeth Dillard and Fiona Stephens, who were together in Stallings' production of The Maids, will play Hermia and Helena, the Athenian girls who play mix-and-match with their romantic partners. The objects of their affections, Athenian youths Demetrius and Lysander, will be played by Dan Machalinski and Austin Peed.

Omar Shammaa, who was so good as Pascal in Anon(ymous) last fall, takes on Hermia's dad, Egeus, the one whose refusal to allow his daughter to chose her own boyfriend sends everybody on the lam, as well as other roles, which I hope include Robin Starveling, since otherwise we're missing a mechanical. Others in the cast include Kate Klemchuck and Mary DeWitt as fairies Peaseblossom and Mustardseed, along with Angela Geiss, Caitlin Graham and David Link in the ensemble.

Note that both images accompanying this post are from the 1999 film version of A Midsummer Night's Dream directed by Michael Hoffman and starring Michelle Pfeiffer and Rupert Everett as Titania and Oberon, Kevin Kline as Bottom, Anna Friel, Calista Flockhart, Christian Bale and Dominic West as the four lovers, and Stanley Tucci as Puck.

There were a lot of things to like about that movie version, including my favorite group of mechanicals ever, with Kline as the leading man and Roger Rees, Bill Irwin, Gregory Jbara, Sam Rockwell and Max Wright rounding out the group. They came across as a band of brothers with sincere loyalty and affection for each other, giving Midsummer a different feel and making Bottom feel achingly real and his dream achingly lovely. (I never will like Rockwell's over-the-top Thisbe in the play-within-the-play, but I can always avert my eyes during that part.)

In any event, a good Midsummer is something to look forward to in any season. Bring it on, ISU!
Posted by JulieK at 11:45 AM