I Love a Surprise: ARGO Wins Again at the Screen Actors Guild Awards 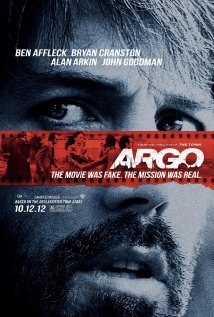 Last night's Screen Actors Guild Awards honored many of the usual suspects -- Daniel Day-Lewis and Tommy Lee Jones from Lincoln and Anne Hathaway for her performance in Les Misérables on the movie side, and ABC's Modern Family, Claire Danes from Homeland, Bryan Cranston from Breaking Bad, Alec Baldwin and Tina Fey from NBC's 30 Rock , Kevin Costner (Hatfields and McCoys) and Julianne Moore (Game Change) for mini-series or TV movies -- with a few surprises as well.

Argo, the clever little thriller directed by (and starring) Ben Affleck about breaking a handful of Americans out of Iraq, took the trophy for Ooustanding Performance by a Cast in a Motion Picture, the SAG equivalent of Best Picture, upsetting Lincoln, Silver Linings Playbook and Les Misérables and taking the lead in Oscar predictions. Don't forget, however, that The Help won in that category at the Screen Actors Guild Awards last year, while The Artist took Best Picture at the Oscars. You just never know...

Other SAG winners included Jennifer Lawrence for Silver Linings Playbook, lauded for her Outstanding Performance by a Female Actor in a Leading Role in a Motion Picture. (Best Actress is so much easier, isn't it?) Lawrence and Jessica Chastain, nominated for Zero Dark Thirty, have been considered the top contenders for Oscar's Best Actress for quite a while, and they both won at the Golden Globes. Does this SAG Award mean Lawrence is edging ahead in that race? I kind of think so, considering how many SAG members also vote for the Academy Awards.

The other big upset of the evening was on the television side of the aisle, as the Downton Abbey cast took top honors for TV dramas. That meant a win over the likes of the much-lauded Homeland, Mad Men, Breaking Bad and Boardwalk Empire actors. I'm not sure that's warranted, honestly. As much as I love Downton Abbey, I found myself straying last season because of the contrivances involving Matthew and Mary and much of the murder plot. I think Homeland and its stars had a better year, Mad Men was pretty good except for that Too Much Megan problem, and Breaking Bad was as riveting as ever. Boardwalk Empire is too violent for me (looking at you, Gyp Rosetti) so I'd put it in last place on this list, but any of the other casts could've edged out Downton and I wouldn't have complained.

The Screen Actors Guild also honors stunt ensembles, and those awards went to Skyfall, the James Bond movie, and TV's Game of Thrones. 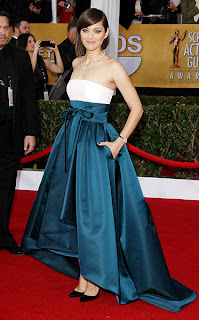 But for my money, Marion Cotillard walked away with the fashion prize in Dior Haute Couture, mixing a creamy white bodice with a full skirt (with pockets!) in a lovely shade of blue. French blue, of course. Cotillard may not be picking up as many awards as Lawrence and Chastain for her performance in Rust and Bone, but she's certainly setting the fashion standard.

And speaking of Jennifer Lawrence... Uh oh on the wardrobe malfunction, when her navy Christian Dior dress split apart at a thigh-level tier when she got up to accept her award. Oh well. A see-through pants suit on Oscar night didn't hurt Barbra Streisand all that much in the long run.
Posted by JulieK at 10:59 AM