Another Don't Miss -- NOTORIOUS -- on TCM at Midnight 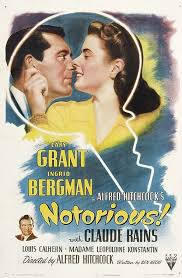 The programmers at Turner Classic Movies have certainly had my number this month, what with all the film noir and a focus on screenwriter Donald Ogden Stewart, who specialized in romantic comedy.

Last week, they aired Holiday, the Cary Grant/Katharine Hepburn comedy that sits at the top of my all-time favorite list. And now, tonight, we get Notorious, not the B.I.G.one, but a 1946 suspense classic directed by Alfred Hitchcock, starring Ingrid Bergman as a bad girl, one Alicia Huberman, and Cary Grant as the dark and dangerous spy who's keeping an eye on her. He's keeping a few other things on her, too, and it's that combination of seduction, betrayal and danger that makes Notorious so delicious.

Cary Grant may have created the perfect screen hero using elegance and charm, intelligence and mischief, to make an indelible mark on film. Notorious shows off his dark side. And that is a very good side for Mr. Grant.

Even aside from Grant's drop-dead gorgeous, drop-dead sardonic spy, there's a lot to love about Notorious. Ingrid Bergman is a wonderful partner for him. He's all sharp edges, while she's all soft doubt and sensuality. You believe in the attraction as well as the doubts. Hitchcock makes sure of that.

The plot sets her up as the daughter of a Nazi convicted of treason to the United States in a very public trial. So she's the notorious one, since everyone suspects her of aiding and abetting Dad. Plus she's been known to drink and party too much, making her reputation even worse. Enter Cary Grant as Devlin, the cynical spy who woos her long enough to get her to go after one of Dad's former compatriots, now living the good life in Brazil.

That compatriot is Alexander Sebastian, a small, seemingly sweet man who has a battle-ax of a mother and some very nasty friends. The elegant and urbane Claude Rains turns Sebastian into one of Hitchcock's best villains, someone who is warm and sympathetic, clearly smitten with Bergman's Alicia, even as he plots with Nazis on the side.

The romantic complication for Devlin and Alicia is that it's his job to get her to seduce Sebastian, and to clear her name from her father's evil deeds, she has to do it, even though the two are really in love with each other. That is a pretty dandy conflict as conflicts go.

So Alicia goes through with it, playing on Sebastian's major crush to get herself into his life and his household. And then the games really begin, building to a swanky party where she has to steal a key to the champagne cellar, trade the key to Dev right under Sebastian's nose, get into the wine cellar to find the hidden uranium (I'm not making this up!) and get back to the party before anyone is the wiser. Uranium! Poison! Champagne! Jealousy! Jeopardy!

I cannot recommend Notorious highly enough. It's just that good. And it begins tonight at midnight (Central time) on Turner Classic Movies.
Posted by JulieK at 10:36 AM