Verdi's AIDA from MIO Today at 3 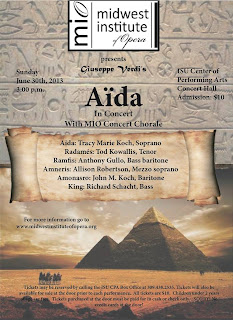 The Midwest Institute of Opera will offer a concert version of Verdi's Aida this afternoon at 3 pm at the Illinois State University Center for the Performing Arts.

Verdi's four-act opera about a pair of ill-fated lovers in ancient Egypt has been an audience favorite since its first performance in 1871. Over the years, Aida has seen notable performances by sopranos Teresa Stolz, Maria Callas, Renata Tebaldi, Leontyne Price and Montserrrat Caballé as Aida; tenors Richard Tucker, Jussi Björling, Jon Vickers and Placido Domingo as her lover Radames; and conductors like Arturo Toscanini, Herbert von Karajan, Georg Solti and Zubin Mehta with the baton.

For the Midwest Institute of Opera, Cara Chowing conducts, with soprano Tracy Marie Koch in the role of Aida; tenor Tod Kowallis as her Radames; mezzo soprano Allison Robertson as Amneris, the daughter of the Egyptian king and a thorn in the Aida/Radames romance; baritone John M. Koch as Amonasro, Aida's father; bass baritone Anthony Gullo as high priest Ramfis, and bass Richard Schacht as the Egyptian king. Pianist Byul Nim La will accompany this concert staging of the opera.

The MIO version of Aida will be sung in Italian with English supertitles. Tickets are $10 and are available at the door. You may also call the ISU CPA Box Office at 309-438-2535 an hour prior to the show. Note that tickets purchased at the door must be paid for in cash.
Posted by JulieK at 11:18 AM