Chicago's Joseph Jefferson Awards for non-Equity productions were handed out earlier this week, with When the Rain Stops Falling, an Australian play produced by Circle Theatre, Under a Rainbow Flag, a Pride Films and Plays musical production, and Smokey Joe's Cafe, a revue from Theo Ubique Cabaret, coming away with Best Production honors in the play, musical and revue categories. 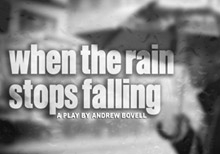 When the Rain Stops Falling, a 2008 play by Andrew Bovell that looks into family ties and troubles over a span of eight decades and four generations, also won for director John Gawlik and projection designer Kevin Bellie at Circle Theatre, while Theo Ubique director Brenda Didier and musical director Jeremy Ramey were honored for their contributions to Smokey Joe's Cafe, a celebration of the 20th century pop songbook of Jerry Leiber and Mike Stoller. 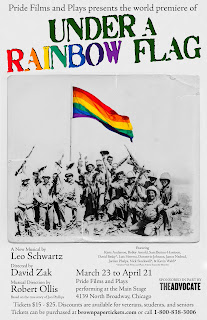 Pride Films and Plays had a world premiere with Leo Schwartz's Under a Rainbow Flag, a musical look at the lives of gay soldiers during World War II performed at Profiles Theatre in March and April, 2012. In addition to the Best Musical prize, Rainbow Flag earned a Best New Work award for Leo Schwartz, who wrote the score and the book.

Supporting actor honors went to Walter Briggs as the Gentleman Caller in The Glass Menagerie at Mary-Arrchie, Jason Richards as one of the puppeteers in Avenue Q at NightBlue Performing Arts, Felisha McNeal as Lola, the middle generation in Cheryl West's family drama Jar the Floor at eta Creative Arts Foundation, and Danni Smith, who played multiple roles in Michael John LaChuisa's See What I Wanna See at Bailiwick Chicago. 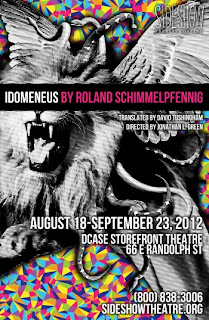 The cast of Sideshow Theatre Company's production of Idomenus, a rewind and replay of Roland Schimmelpfennig's musing on the mythological tale of a King of Crete who made a terrible promise, was named Best Ensemble.

You can see the complete list of nominees and winners here. As always, the Non-Equity Jeff Awards paint a colorful picture of what's been happening at Chicago's creative, original small theaters.
Posted by JulieK at 11:37 AM