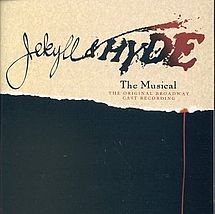 The Strange Case of Dr. Jekyll and Hyde, the scary horror/sci fi novel by Robert Louis Stevenson, may seem like odd material for a Broadway musical. But when you find out that Frank Wildhorn was behind it, things become a little more clear.

Jekyll & Hyde was actually Wildhorn's first stage musical success -- before its premiere at Houston's Alley Theatre in 1990, Wildhorn was best known for writing a hit single for Whitney Houston and adding a few songs for the stage version of Victor Victoria -- but by 1999, Wildhorn had three shows on Broadway at the same time, with Jekyll & Hyde, The Scarlet Pimpernel and The Civil War all in theatres on the Great White Way.

All three shows feature Wildhorn's trademark pop power ballads and dark, sweepy themes of identity and conflict, leading the way to Dracula the Musical, Wonderland and Bonnie and Clyde, the 2011 musical that scored a Theatre World Award for Jeremy Jordan (of Newsies and TV's Smash), with Tony nominations for his costar, Laura Osnes, and for Wildhorn's score (with lyrics by Don Black).

Wildhorn is credited with conceiving of Jekyll & Hyde with Steve Cuden, writing the music, and co-writing the and lyrics with Cuden and Leslie Bricusse. That score include huge, breakout songs like "This Is the Moment" and "Someone Like You," and a song called "Confrontation" where the actor playing Dr. Jekyll does a duet with himself and his alter ego of Mr. Hyde. Now that's not something you see every day.

East Peoria's Eastlight Theatre opens its production of big, bad Jekyll & Hyde tonight with a 7:30 pm performance. Chip Joyce directs, with a cast that includes Jarod Hazzard as both halves of the Jekyll/Hyde personality, River Stanford as Emma, Jekyll's fiancee, and Julia Myers as Lucy, the less reputable romantic interest originally portrayed by Linda Eder, who was married to Wildhorn from 1998 to 2004 and is widely considered the foremost interpreter of his songs.

You can get more information by visiting the event's Facebook page or the Eastlight website, or arrange tickets online by clicking here.
Posted by JulieK at 3:00 PM