FIDDLER Is Back on the Roof in Sullivan 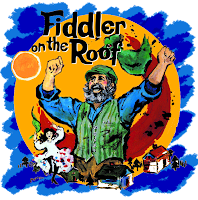 Do you wish you were a rich man? Do you depend upon tradition? Is "Sunrise, Sunset" the theme song to all of your family videos and slide shows?

Fiddler on the Roof may be about a Jewish milkman and his five daughters in Tsarist Russia, but its themes are more expansive than that. Trying to survive and to hang onto a sense of family and joy in the midst of upheaval and change is pretty much what the world has always been about.

Tevye, our milkman, is faced with more upheaval than most, what with his daughters getting attached to increasingly unsuitable men, his village overrun with Cossacks, and his religion and dearly held traditions battered and besieged at every turn. But the basic theme underlying the show -- that time moves on and we must, too, no matter what the challenges -- survives, just like Tevye. Sunrise, sunset, swiftly fly the years. One season following another, laden with happiness and tears. That isn't just a lyric in a Broadway musical. It's reality, people.

Fiddler on the Roof won nine Tony Awards for its original 1964 Broadway production including Best Musical, with Tonys going to composer Jerry Bock and lyricist Sheldon Harnick for their score, Jerome Robbins for both his direction and his choreography, producer Harold Prince, Joseph Stein, author of the book, costume designer Patricia Zipprodt, and, of course, Zero Mostel, who played Tevye, and Maria Karnilova, who played his wife, Golde. Stars like Bea Arthur, Bert Convy, Leonard Frey, Julia Migenes and Austin Pendleton also appeared in that production, with Frey also showing up in the 1971 movie version of the show.

Sullivan's Little Theatre on the Square has done Fiddler a time or two every decade since the 70s, with stars like Tom Poston, Shelley Berman and Stubby Kaye headlining the cast. This time, Jack Milo and Therese Kincade will appear as Tevye and Golde, reprising roles they played in a recent production at Eastern Illinois University in Charleston.

Karla Shook directs for the Little Theatre, with choreography by Sam Hay and musical direction by Kevin Long.

Fiddler On The Roof opens tonight at the Little Theatre on the Square, with performances continuing through June 16. You can call the box office at 217-728-7375 to purchase tickets, or get them online at www.thelittletheatre.org. The theatre is located on the square in "downtown" Sullivan, Illinois, at 16 East Harrison Street.
Posted by JulieK at 1:57 PM

Email ThisBlogThis!Share to TwitterShare to FacebookShare to Pinterest
Labels: Fiddler on the Roof, Jerry Bock, Joseph Stein, Sheldon Harnick, The Little Theatre on the Square