Everybody Ought to Have DEVIOUS MAIDS 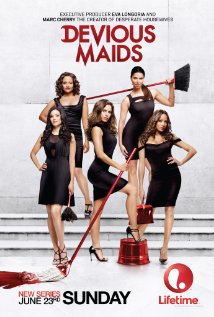 At almost the same moment the series Desperate Housewives locked its doors, creator Marc Cherry was in the news for a pilot he was pitching to ABC. It was called Devious Maids and it was based on a Mexican TV series that was itself inspired by Desperate Housewives. But ABC passed on the Maids pitch the day after Desperate Housewives aired its finale. Lucky for Mr. Cherry and for fans of his Housewives, Lifetime picked it up a few weeks later, and they're starting it tomorrow as a bit of tasty summer entertainment.

Instead of focusing on four upper middle-class women -- one blonde, one redhead, and two brunettes, including one Latina -- all living on the same suburban street, as Desperate Housewives did, Maids looks at five Latina women, the domestic help of the very rich in Los Angeles. There's the same quirky pop style you'll recognize from Housewives, and both series begin with a death. In Housewives, it was the suicide of a member of the inner circle that jumpstarted the action. In Maids, it's the murder of a pretty, unhappy servant named Flora. But the bright colors, the ironic tone, the notion that underneath the patina of paradise lie some very dark secrets...

It all looks very Desperate for these Devious Maids. Without a narrator, however. In the former, the dead lady gave us voice-overs to cue the current action. This time out, we're on our own with beautiful, scheming Carmen (Roselyn Sanchez), working for a superstar recording artist and trying to catch his eye and her own train to stardom; sweet Rosie (Dania Ramirez), trying desperately to get her son to America; cynical Zoila (Judy Reyes), who works for a neurotic socialite (played by Susan Lucci) who'd be perfect for a Real Housewives show; Zoila's daughter Valentina (Edy Ganem), who has a thing for the boss's son; and Marisol (Ana Ortiz), who has ulterior motives for taking the maid gig.

The various heads of households include different kinds of crazy, with a whole lot of narcissism and privilege front and center. Butterfly (and maid) collector Adrian Powell (Tom Irwin) and his nutball wife Evelyn (Rebecca Wisocky) lead the parade -- it was their maid who was knifed during a dinner party -- with a lawyer (Brett Cullen) and his trophy wife (Brianna Brown) and a soap star (Grant Show) married to a very ambitious actress (Mariana Klaveno) rounding out the list of suspects. Er, employers.

I enjoyed the first episode, which is available at Lifetime, the Internet Movie Database and Hulu, if you'd care to take a look before the official debut tomorrow. The lead players are certainly attractive, and it helps that I recognize (and like) most of them from their previous work. Sanchez is as stunning as she was on Without a Trace, it's nice to see Reyes again since Scrubs was canceled, Ortiz was one of the best things about Ugly Betty, and Susan Lucci needs no introduction to anyone who ever saw All My Children. Tom Irwin, meanwhile, is a Peoria native and ISU alum, Matt Cedeno, who plays superstar Alejandro Rubio, the one Sanchez's Carmen is trying to hook, came from Days of Our Lives, and Melinda Page Hamilton, who has an odd role as a Slavic taskmaster running Rubio's household, had a memorable turn as the first Mrs. Draper on Mad Men. Valerie Mahaffey, who sticks in my mind for her role as the bad date who was into papier-mâché (with over-the-top French pronunciation) on Seinfeld, also pops up in the pilot as an unwelcome first wife.

And there's also Rebecca Wisocky, someone I remember from Actors Theatre of Louisville's Humana Festival of New American Plays, as the looniest tune in a loony symphony. Not sure how her character arc is going to turn out. I may be tired of her wild eyes and over-the-top insanity very quickly. Okay, I'm already tired of it. So maybe she can be the next knifing victim.

Devious Maids airs Sunday nights at 9 Central on Lifetime. There are 13 episodes in this initial order, and if the ratings are good, there may be more. I'm sort of torn -- it would be nice to tie up all the plotlines they've started in those 13 and keep it fresh, plus I'd like to see Susan Lucci back on All My Children and the stereotype of all the crazy, selfish beyotches with money is tiresome -- but, on the other hand, it is fun, and it's giving work to some talented actresses who deserve to be seen. I suggest you tune in for the premiere (or sneak-peek it at one of the links above, if you'll be glued to the Mad Men finale like me) and make up your own mind. If you liked Desperate Housewives, this may just be your cup of tea. With un poco de arsénico on the side.
Posted by JulieK at 1:35 PM