Tracy Letts Is Taking Over the Universe

Tracy Letts has been big news for Chicago and Steppenwolf Theatre for quite some time, what with his play August: Osage County tearing it up all over the place (Pulitzer Prize, five Tony Awards, six Jeff Awards) and then getting made into a movie starring Meryl Streep and Julia Roberts. Before that, plays like Killer Joe and Bug also did quite well, with lots of productions and movie versions of their own, Superior Donuts also made it to Broadway, and Man from Nebraska garnered him his first Pulitzer nomination.

Letts' playwriting is one thing, but he's also an actor to be reckoned with. His appearance opposite Amy Morton in the Steppenwolf production of Edward Albee's Who's Afraid of Virginia Woolf (shown above) that transferred to Broadway last year has earned him a Drama Desk Award and a Tony nomination in the Leading Actor category. A lot of pundits are assuming that Tom Hanks will win the Tony, but given the Drama Desk... I wouldn't be a bit surprised if Letts took home off that one, too.

And now he and actress Carrie Coon, who played Honey in that Virginia Woolf, have announced their engagement. 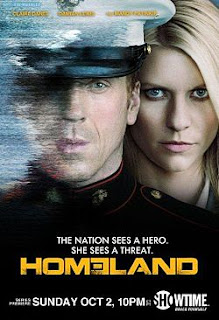 You might think there isn't anything else Mr. Letts could possibly fit into his schedule, but you would be wrong. Come September, Letts will be starring on Showtime's Homeland, the Emmy magnet about spies, moles and international terrorists. He'll be playing a tough United States Senator who heads up a committee trying to piece together what happened that blew the lid off U.S. intelligence in the previous season.

So far, Letts has the Pulitzer and a Tony as the playwright behind August: Osage County. All he needs is an Oscar for the August screenplay and an Emmy for Homeland, and he'll have scored EPOT status, which is a lot better than the usual EGOT, anyway, right? Or maybe Letts can pull a Grammy out of his pocket, too, and put himself in the lofty EPGOT category currently occupied by only Richard Rodgers and Marvin Hamlisch.

Tom Hanks, his rival for this year's Tony, is working on an EGOT from the other side, since he already has the Oscar and the Emmy. Maybe the two can collaborate on something Grammy-worthy together...

To find out which one gets the Tony for Outstanding Leading Actor in a Play, watch the Tony Awards airing Sunday.
Posted by JulieK at 1:37 PM