Ready or Not, Here Comes August

Back to school, the last of the summer blockbuster movies, sneak previews of the fall TV season, theatres going strong and gearing up... That's August for you! 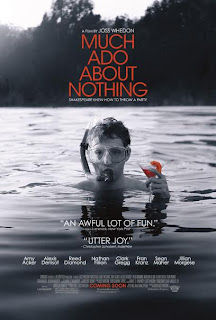 If you haven't already made the trip over to Champaign to see Joss Whedon's effervescent and charming Much Ado About Nothing at the Art Theater Co-op, tonight is your last chance. The Art is offering 5 pm and 7:30 pm screenings of Much Ado, followed by a 35mm print of Alfred Hitchcock's Vertigo at 10 pm. Vertigo was chosen as the No. 1 film of all time by movie scholars who responded to Sight & Sound's 2012 poll, eclipsing Orson Welles' Citizen Kane.

Tonight Macbeth, tomorrow Failure: A Love Story, and then another Macbeth and a Comedy of Errors as the weekend wends on. It's the end of the summer repertory season for the Illinois Shakespeare Festival, but there are still nine mainstage performances, a little Billy Shakespeare, and a host of preshows and tours left on the schedule. Get out to Ewing Manor while there's still time!

Les Miserables is on stage beginning tonight at Parkland College Theatre under the auspices of the Champaign-Urbana Theatre Company. Stephen Fiol directs for the CUTC, with a very large cast that includes Kyle Pollio as Jean Valjean, Timothy Renner as Javert, the man on his trail, Bethany Stiles as poor Fantine, James C. Dobbs and LaDonna Wilson as Mr. and Mrs. Thenardier, Caitlin Caruso-Dobbs as Cosette, Marah Sotelo as Eponine, and Corbin Knight-Dixon as Marius. Look for Thursday, Friday, Saturday and Sunday performances through August 11. 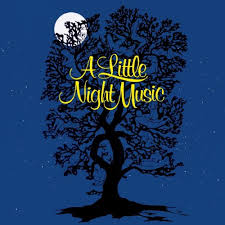 Prairie Fire offers A Little Night Music, the Stephen Sondheim/Hugh Wheeler swirl through Midsummer in the Land of the Midnight Sun, August 2 through 4 and 9 through 11 at the Illinois University Memorial Center. It's all about Desiree Armfeldt, a beautiful actress with a current lover who is decidedly inconvenient, an old lover who resurfaces at the wrong time, and various romantic complications that occur when the sun refuses to set and love makes fools of both young and old. A Little Night Music, which features the Song "Send in the Clowns," one of Sondheim's most ruefully romantic, is adapted from the 1955 Ingmar Bergman (non-musical) movie Smiles of a Summer Night, a delightful confection of its own. Prairie Fire's curtain is at 7:30 pm on Fridays and Saturdays and 3 pm on Sundays.

The Miller Park Summer Theatre production of Snow White and the Seven Dwarfs also begins tomorrow, August 2, with a second performance on the 3rd. Admission is free.

Urbana's Station Theatre finishes up its run of the play Freud's Last Session by Mark St. Germain on August 3rd. University of Illinois theatre professor Tom Mitchell directs Gary Ambler and Jesse Angelo in this two-hander  that sets Freud against a young C.S. Lewis, author of "The Narnia Chronicles." As the Station website describes the play, "On the day England enters World War II, Freud and Lewis clash on the existence of God, love, sex and the meaning of life -- only two weeks before Freud chooses to take his own."

The Improvised Shakespeare Company brings its spur-of-the-moment Shakespearean antics to the Theatre at Ewing one last time on August 5. Tickets are $16 and available through the Illinois Shakespeare Festival and the ISU Center for the Performing Arts box office. You may also call 866-IL-SHAKE for tickets. 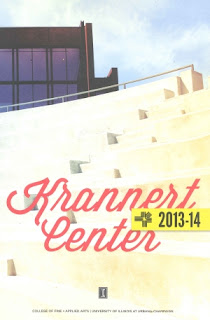 Tickets go on sale August 10 for the entire 2013-14 season line-up set for Krannert Center for the Performing Arts in Urbana. University of Illinois's Department of Theatre, opera, dance, symphonies, musicians and lots more will fill the different performance spaces inside the Krannert Center as 2013 turns into 2014, with options for just about every taste.

And the Normal Theater offers something out of the ordinary in time for Labor Day weekend -- a Jerry Lewis film fest. It will take you safely from August into September with The Bellboy at 7 pm on August 29 and 30, and The Nutty Professor on August 31 and September 1. If you, like the folks at the Normal Theater, are in need of a Jerry Lewis fix, this is your ticket.
Posted by JulieK at 2:11 PM