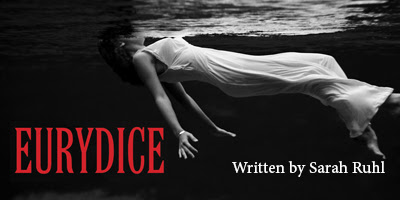 Eureka College is becoming the go-to place locally for the plays of Sarah Ruhl. This time, it's Eurydice, Ruhl's 2003 re-imagining of the Greek myth of Eurydice and Orpheus. In the original, as well as in most modern adaptations, the story tends to be all about Orpheus, a musician so talented, so inspired, that when his wife Eurydice dies shortly after their wedding, his mournful singing makes the gods and goddesses of Mount Olympus weep along with him. They urge him to travel to the Underworld to retrieve her, and once there, he even convinces Hades, god of the Underworld, to allow it. But Hades sets a condition -- Orpheus can take Eurydice back to the world of the living, but only if he walks ahead and never looks back to make sure she's still there. As in many myths, the temptation is too much, Orpheus turns, and Eurydice is lost to him forever.

What Ruhl brings to the table is a different focus. She sets her story around Eurydice instead of her singing idol husband, showing us her point of view during their wedding, the tragic accident that befalls her, her journey down to Hades and what happens to her there, including reuniting with her father, who passed away years before. When Orpheus comes for her, she has to decide whether she wants to rejoin life in the real world or stay with her beloved dad. It's a whole different story.

Ruhl's script is lyrical and poetic, loaded with emotion as it looks at what it means for Eurydice to be alive and to be dead, to weigh the demands of different kinds of love. It's a challenging play, too, as Ruhl serves up surreal images and strange characters to define her Underworld.

On Wednesday March 2, director Caitlin Herzlinger will bring Ruhl's Eurydice to Pritchard Theatre on the campus of Eureka College for the first of five performances. Wednesday, Thursday, Friday and Saturday performances begin at 7:30 pm, while the Sunday matinee is set for 2 pm. There is no set price for tickets -- you are invited to pay what you think is best, with all proceeds earmarked for the Heart House of Eureka.

Click here for the Eureka College event page. Email tickets@eureka.edu or call 309-467-6363 to make reservations.
Posted by JulieK at 8:32 PM