It's That Time Again -- February Fever!

I'm late out of the gate, but February entertainment options are not. They're starting up soon, and you need to know to get your tickets, your DVR fired up, or your snacks ready. 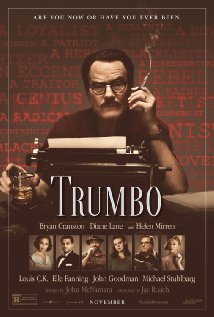 Right now, Champaign's Art Theater Co-op is offering Trumbo, the biopic about blacklisted Hollywood screenwriter Dalton Trumbo, starring Bryan Cranston in the title role. A big part of the Dalton Trumbo story involves the Oscars, as his work won two of them during a time he couldn't take credit for it. An English writer named Ian McLellan Hunter "fronted" for Trumbo on the 1953 film Roman Holiday, which won an Academy Award for its writing, while Trumbo used the pseudonym "Robert Rich" for The Brave One in 1956, another Oscar winner for its story. And this year, Cranston is nominated for his work as an actor in Trumbo. You'll find the film at the Art tonight and tomorrow at 10 pm, with showings at 11:30 am on Saturday the 6th and 2:30 pm on Sunday the 7th and Wednesday the 10th. Yes, those are odd times, but Trumbo is worth a look. 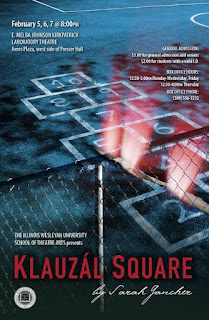 On February 5, Illinois Wesleyan University's School of Theatre Arts presents Sarah Gancher's Klauzal Square, a ghostly story of bullying, religion, and the power dynamic among preteens, inspired by a real Budapest playground built on top of what was once a Nazi mass grave. IWU senior Tyler Stacey directs a cast of five, including sophomore Libby Zabit, who plays Klara, the one with a ghostly friend, along with Hailey Lechelt, Jackie Salgado, Kristin Solodar and Brooke Teweles. Performances of Klauzal Square run from February 5 to 7 in the E. Melba Johnson Kirkpatrick Lab Theatre on the Wesleyan campus. Call the box office at 309-556-3232 for ticket information.

Next week, Heartland Theatre kicks off the winter part of its season with Clybourne Park, Bruce Norris's Pulitzer, Tony and Olivier-winning play from 2010. The play, which functions as a companion piece to Lorraine Hansberry's award-winning A Raisin in the Sun, uses events in one Chicago house, shown in 1959 and then 2009, to illuminate the racial issues underlying where and how we live in America. In the 50s, Clybourne Park is a white, middle-class neighborhood, and a white couple named Bev and Russ are selling their home to a black family. When we see it again in 2009, it has become an all-African-American neighborhood, but white people are trying to move back in, pushing all the black people out and razing houses to the ground in the name of gentrification. The same actors play different people in the two timelines, giving them a chance to take on more than role, in some cases on opposite sides of the issues raised. Heartland Theatre's Artistic Director Rhys Lovell is at the helm of Clybourne Park, with a cast that includes John Bowen, Anastasia Ferguson, John Fischer, Joshua McCauley, Elante Richardson, Michelle Woody, Tim Wyman and Kristi Zimmerman-Weiher. For show dates and times, click here. For reservation information, try this page.

The musical Ragtime takes the stage at the Bloomington Center for the Performing Arts on February 11 for just one show at 7:30 pm. It's not clear from the BCPA site who is performing this Broadway musical, which played for two years before the turn of the 21st century and earned three Tony Awards, including a Featured Actress win for Audra McDonald, who only had two Tonys back then. Ragtime was her third, but she has six now, if you're keeping track. Ragtime is based on the E. L. Doctorow novel, showing a swirling series of events in American history that involve people from disparate parts of society -- the upper and lower classes, a jazz musician, Jewish immigrants from Eastern Europe -- against a backdrop of a very American form of music. Lynn Ahrens and Stephen Flaherty wrote the score, while Terrence McNally wrote the book. The Illinois State University School of Theatre and Dance also kicks off its 2016 theatre season next week, with Illinois Shakespeare Festival Artistic Director Kevin Rich directing... Shakespeare! It's Romeo and Juliet this time, that timeless tale of star-crossed lovers who fall for each other in spite of parental disapproval and a climate of feuds and fighting in old Verona. Romeo and Juliet opens in Westhoff Theatre on February 12, with James Keating and Kaitlyn Wehr as R and J. Performances continue through the 20th, including a 2 pm matinee on the 14th if Romeo and Juliet is your idea of a cool Valentine's date. For more information (including a link to buy tickets), check out this ISU press piece. 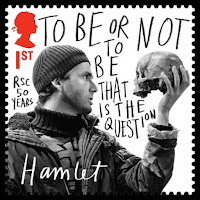 If Hamlet is your favorite Shakespeare play (and it is mine), you're in luck. Illinois Wesleyan University's School of Theatre Arts is putting Hamlet on stage at the Jerome Mirza Theater in McPherson Hall on February 23, 24, 25, 26 and 27 at 8 pm and February 28 at 2 pm. IWU professor Christopher Connelly directs Shakespeare's longest play, the tragedy of the Prince of Denmark as he muses on life, death, revenge, and what to do about the rotten state in which he lives. No poster for this one that I could find, so let's content ourselves with a picture of David Tennant as Hamlet on a British stamp from 2011.

ISU Theatre is back on February 26 with the opera version of Elmer Rice's Street Scene, directed by new faculty member Robert Quinlan. Rice wrote the book of the musical, too, moving the action from a sweltering day on the front steps of a tenement in a "mean quarter of New York" in the 1920's to the same hot spot in 1946. The plot involves various residents of the building, as they gather to gossip, flirt, fight and generally push against each other in their small square of real estate. The opera's music was written by Kurt Weill, while poet Langston Hughes provided the lyrics. The 1947 Broadway production won Tonys for Weill and its costume designer, although it has never been revived on Broadway. When casting was announced, Quinlan's ensemble included Rebecca Crumline as Anna Maurrant, an unhappy woman who lives in the tenement behind the stoop; Joshua Ramseyer as her violently jealous husband; Morgan Melville as their daughter, Rose; and Kevin Alleman as Sam Kaplan, a Jewish boy who's in love with Rose. Street Scene is scheduled for performances in the ISU Center for the Performing Arts from February 26 to March 4. 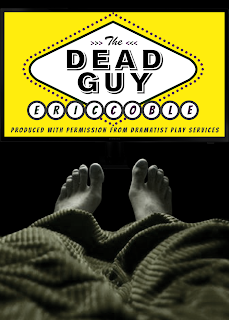 Closing out the month, Arts at ICC will present The Dead Guy by Eric Coble, with performances from February 26 to March 6. Coble's 2005 play looks at the continuing appetite for reality TV and the moral price we pay, focusing on a show (also called The Dead Guy) with a shocking premise. Contestant Eldon Phelps gets a cool million dollars to appear on the show, but... There's a big but: Eldon is required to spend the entire amount during one week, with his death looming at the end of it, live and on TV. As he goes through his spending-a-million week, the audience is busy voting on how he should kick his reality TV bucket. Ouch. ICC Theatre is giving you six performances to catch The Dead Guy, with shows on Fridays and Saturdays at 7:30 pm and Sundays at 2:30 pm starting February 26. I am also without a poster for The Dead Guy at ICC, but Proper Hijinx Productions in Texas has a nifty one for their current production that you can see here.
Posted by JulieK at 5:20 PM