Let Hercules himself do what he may,
The cat will mew and dog will have his day.

Hamlet, the play in which those lines appear, has enjoyed more than one day since Shakespeare wrote it as the 16th century was turning into the 17th. It is Shakespeare's longest play, one of his most frequently performed plays, and has spawned so many quotes and aphorisms, you can't fit them all on one T-shirt. "The Conscience of the King" is the title of a Star Trek episode, while "Neither a borrower nor a lender be" (and a whole lot more) showed up on a musical episode of Gilligan's Island.

From Stanislavski to Spongebob, from Richard Burbage to Benedict Cumberbatch, Hamlet has staying power. 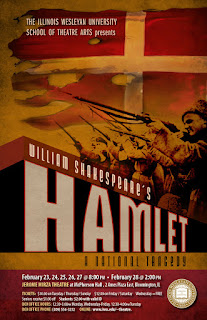 The newest Hamlet in central Illinois opens tomorrow night in the Jerome Mirza Theatre in McPherson Hall at Illinois Wesleyan University. The poster for director Christopher Connelly's production at IWU has a political, even war-minded edge, reminding us that Hamlet is, after all, a prince who needs to consider what's right for his country as well as his family. In an IWU press piece written by Emily Phelps, Connelly says, "The play is a labyrinth Hamlet wanders in to avoid actually having to accept his responsibility not only for his murdered father and his own weakness of inaction, but also for the increasing obligation to his country."

Hamlet opens tomorrow night at 8 pm, followed by evening performances through Saturday the 27th and a matinee at 2 pm on Sunday, February 28th. Tickets are $10 for Tuesday, Thursday and Sunday, and $12 for Friday and Saturday. Wednesday night's performance is offered free of charge. If you are interested in reserving tickets, you may contact the McPherson box office at 309-556-3232 or click on the Buy Tickets Now link on this page.
Posted by JulieK at 3:02 PM