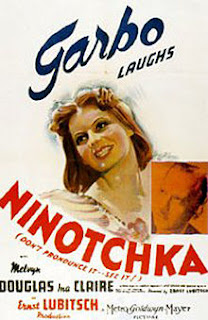 Ah, the Lubitsch touch... Ernst Lubitsch was one of Hollywood's finest directors during its Golden Age, creating a continental world of wit and sophistication, where the elegant thieves of Trouble in Paradise can lift an increasingly intimate array of items -- a wallet, a watch, a garter -- off each other over dinner, where the two clerks in The Shop Around the Corner can wage a war of words even as they fall in love in a romantic version of Budapest that looks like it belongs inside a snow globe.

Lubitsch had the touch all right -- his movies are often about sex, but it's an amusing and knowing kind of sex, never crude, always as charming and sophisticated as his characters.

The two movies I mentioned above were written by Samson Raphaelson, the screenwriter whose dialogue Pauline Kael famously said "had the gleam of appliquéd butterfly wings on a Ziegfield girl's toque." In other words, he was the perfect match for Ernst Lubitsch. But in Ninotchka, the 1939 movie playing late tonight on TCM, the script came from Billy Wilder, Charles Brackett and Walter Reisch, teaming Lubitsch with Wilder, the clearest heir to his witty, perfectly polished throne.

Ninotchka also gave Lubitsch a chance to work with Greta Garbo, known then as the queen of tragedies. In this movie, the poster makes sure we know that "Garbo laughs," playing off a famous campaign for Anna Christie, her first talkie, when it was all about "Garbo talks!" The fact that she was laughing -- or more specifically, that her character, a stern, all-business Russian woman named Nina Ivanovna Yakushova, begins to lighten up and laugh -- is pretty much the plot of Ninotchka.

In the film, Garbo's Comrade Yakushova comes to Paris to find out what's gone wrong with the mission of three previous emissaries (the wonderful character actors Sig Ruman, Felix Bressart and Alexander Granach) sent to sell some jewels confiscated in the Russian Revolution. But the Grand Duchess (Ina Claire) who once owned the jewels has sent her own emissary, suave Count Leon, played by Melvyn Douglas, to intercept the three Russians, and he's successfully sidetracked them with all the fine things Paris has to offer, like free-flowing champagne and cigarette girls. Once Nina Ivanovna gets there, she gets to work putting the mission back on track, until Count Leon starts to corrupt her, too.

The last time I talked about Ninotchka, I summed it this way:


Once chilly Comrade Ninotchka comes up against the debonair count and his pencil-thin mustache, she begins to thaw, going so far as to buy a frivolous hat, drink too much and spend the night in his arms. Will love prevail when the Grand Duchess steals back her jewelry? Will Ninotchka's sense of duty to the Soviet state force her to reject Leon's materialistic world? Will she ever find her way back to her Parisian count?

It's a lovely trifle, a perfect film for midnight (Eastern time -- 11 pm in the Central time zone) on a cold February night. Ninotchka is part of TCM's celebration of the Oscars. It was nominated for four of them, including Best Picture, Best Actress for Garbo, Best Writing for the original story by Melchior Lengyel, and Best Writing (Screenplay) for Brackett, Reisch and Wilder. If you are playing TCM's 360 Degrees of Oscar, look for Melvyn Douglas as the link between The Candidate (the movie before Ninotchka on the TCM schedule) and Ninotchka, and Felix Bressart as the link between Ninotchka and Bitter Sweet, the musical that comes after.
Posted by JulieK at 1:20 PM