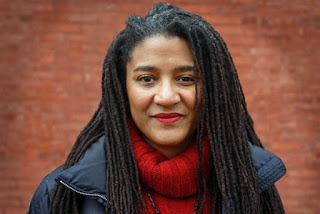 Playwright Lynn Nottage, represented on area stages with last fall's Intimate Apparel at Heartland Theatre, By the Way, Meet Vera Stark the previous year at Illinois State University, and New Route Theatre's productions of Fabulation, or the Re-Education of Ondine, has won this year's Susan Smith Blackburn Prize for her play Sweat.

Sweat was co-commissioned by the Oregon Shakespeare Festival and Washington DC's Arena Stage. It involves a group of friends in Reading, Pennysylvania, America's poorest town, a place where the factory jobs that built the town are disappearing and once-mighty unions are now powerless to protect anybody. When rumors of layoffs at the plant begin, the bonds of friendship and the larger sense of community begin to break into pieces.

In his New York Times review of the Oregon production, Charles Isherwood said, "From first moments to last, this compassionate but cleareyed play throbs with heartfelt life, with characters as complicated as any you’ll encounter at the theater today, and with a nifty ticking time bomb of a plot. That the people onstage are middle-class or lower-middle-class folks — too rarely given ample time on American stages — makes the play all the more vital a contribution to contemporary drama."

Nottage's plays have been performed all over the world, with a production of Ruined in Brazil just last month. She is the recipient of a MacArthur "Genius" Grant Fellowship and she has won the Pulitzer Prize (for her play Ruined), the ATCA/Steinberg New Play Award (Intimate Apparel), as well as multiple Obies and Drama Desk Awards, and she was a finalist for the Blackburn Prize in 1998 (Mud, River, Stone) and 2009 (Ruined). Like many playwrights, she also teaches; she is a member of the faculty at the Yale School of Drama and an Associate Professor in the Theatre Department at Columbia School of the Arts. 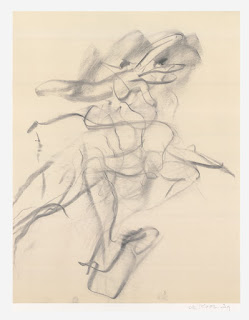 The Susan Smith Blackburn Prize was established in 1978 to recognize women who have written works of outstanding quality for the English-speaking theatre. It is awarded annually, with a $25,000 prize to the winner, a possible Special Commendation of $10,000, and other finalists awarded $5,000 each. The winner also receives a signed and numbered Willem de Kooning print (seen at right) which was created especially for the Susan Smith Blackburn award.

The Blackburn Prize site describes the process this way: "Each year, a specified list of professional theatres throughout the English-speaking world is invited to submit plays for consideration."

They add, "Our permanent list of Finalists, numbering well over 300 plays, has become an important resource for theatres interested in new work. As a direct result of being Finalists, many playwrights have received productions, grants and public recognition. The Prize has motivated women to write for the theatre, and has also fostered the interchange of plays between the United States and Britain, Ireland and other English-speaking countries. It has anticipated later recognition. Eight Finalists have subsequently won the Pulitzer Prize for Drama. The Susan Smith Blackburn Prize is now firmly established as a highly regarded international competition. There is every indication that it will continue to grow."

This year's finalists included Americans Sarah Burgess for her play Dry Powder; Rachel Cusk for Medea; Sarah DeLappe for The Wolves, Dominique Morisseau for Skeleton Crew; and Suzan-Lori Parks for Father Comes Home From the Wars (Parts 1, 2 and 3), along with British playwrights Sam Holcroft for Rules for Living, Anna Jordan for Yen, and Bea Roberts for And Then Come the Nightjars; and Irish playwright Noni Stapleton for Charolais.
Posted by JulieK at 1:08 PM