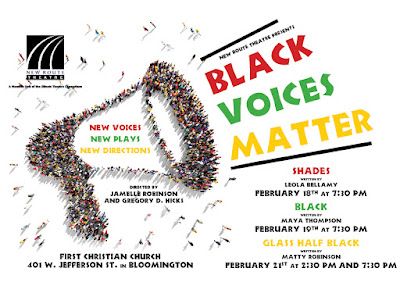 New Route will offer discussions following each performance to give audiences a chance to talk about what they've seen with the casts,  playwrights Leola Bellamy, Matty Robinson and Kamaya Thompson, and directors Jamelle Robinson and Gregory D. Hicks. Because there are three different plays and each post-play discussion will be different, New Route is encouraging audience members to attend every performance.

Although the shows are free, New Route suggests a $5 donation at the door. Performances will take place at the First Christian Church, 401 West Jefferson Street in Bloomington.

For more information about New Route Theatre or the "Black Voices Matter" project, please contact Don Shandrow, Artistic Director or Jamelle Robinson, Development Director at new.route.theatre@gmail.com or check them out on Facebook.
Posted by JulieK at 11:04 AM