David Auburn's LOST LAKE Finds Itself in Manhattan Next Season 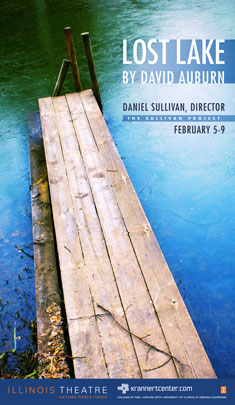 Last month, we saw the inaugural production of the "Sullivan Project," an initiative within the University of Illinois Department of Theatre to workshop new plays. The Sullivan in question is Daniel Sullivan, a prominent Broadway director who is also the Swanlund Endowed Chair and a professor of theatre at U of I. Sullivan's choice to start this project was Lost Lake, a new play by David Auburn, someone Sullivan had worked with before. Proof, also by Auburn, earned Sullivan a Tony as best director back in 2001.

Auburn was in Urbana in January to revise and rework his script as he saw how it played out with Sullivan at the helm and New York actors Jake Weber and Opal Alladin inhabiting the two characters in the play. Weber played Hogan, a scruffy man with a messy past and an even messier cabin, while Alladin was Veronica, a woman from the city who'd rented his cabin by a lake. How the two attempted to move forward through the murky waters in their lives formed the plot of the play. The result was an intriguing, if somewhat uneven Lost Lake, one with all kinds of promise, but some plot issues less than successfully resolved for me.

At the time, I thought that the role of manipulative, charming, infuriating Hogan would be catnip for actors of a certain age, while Veronica was less fully developed. Alladin looked beautiful and did great work with what she had, but there were some twists written into the script that just didn't work, and the balance between the characters was off. At a talkback after the performance I saw, Sullivan talked about how much Auburn had changed who this woman was and what her revelations were during the process, and it seemed clear that Lost Lake was still a work in progress.

The production certainly looked finished, however. Tucked inside the Studio Theatre at the Krannert Center for the Performing Arts, Lost Lake had the benefit of a first-rate set, as scenic designer J. Michael Griggs established the rustic, mysterious lake cabin as a legitimate third character for Hogan and Veronica to play off.

I wondered where Lost Lake was headed after its Urbana workshop, and I asked that question during the talkback I attended. Sullivan indicated that it was very much up in the air, and that if it did move on to another production of some sort, he wasn't at all sure that he would be attached to it.

Was that just a case of hedging bets till plans were set? I don't know. But I do know that the New York Times reported last week that Lost Lake, with Sullivan at the helm, will be part of Manhattan Theatre Club's 2014-15 season. Sullivan will also direct The Country House, a new play by Donald Margulies that precedes Lost Lake on the schedule. In what is being called its world premiere, Lost Lake is set to begin previews at the New York City Center Stage on October 21 and open on November 11, 2014.

No word on whether Weber or Alladin will take on Hogan and Veronica again. I hope so. They braved Central Illinois in January and they ought to get something for their efforts!
Posted by JulieK at 10:59 AM