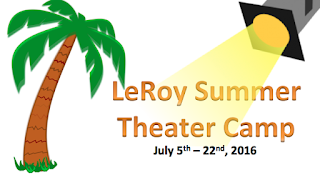 The Bloomington-Normal area is booming with opportunities for children who want to spend some time on the stage. There's Miller Park Theatre through Bloomington Parks & Rec, currently in their "summer 2016 theatre workshop" phase before they perform Bye Bye Birdie at the end of July; Normal Parks & Rec's High School Summer Theatre, which finished up You're a Good Man, Charlie Brown in June and opens Disney's Little Mermaid next week at the Connie Link Ampitheatre in Normal; and Summer on Stage, which this summer is working in conjunction with Prairie Fire Theatre to do Oklahoma! Jr. and an Oklahoma pre-show. Community Players also launched a Summer Camp this year for 5th to 8th graders, offering Schoolhouse Rock Live! in June under that banner, while Illinois Wesleyan University, which used to host Summer on Stage, seems to have started something called Young Artists in Theatre, with a "theatre day camp" for 6th to 9th graders last month.

That gives plenty of opportunities to kids who live in B-N, but what about outlying areas? As of last week, lucky children in and around LeRoy are covered. LeRoy Elementary School music teacher Drew Scott opened LeRoy Summer Theater Camp on July 5, inviting incoming 5th, 6th and 7th grade students from LeRoy and surrounding districts to strut their stuff in a musical.

Scott and art teacher Beth Bataoel were the creative forces behind last February's Lion King Jr., involving 76 elementary school students in every level of the production, from designing their own costumes and scenic elements and helping to build them to singing and dancing on stage. Click the link under The Lion King to see a video made by Bataoel to highlight the process.

LeRoy Summer Theater Camp will feature the same kind of immersive experience, with Scott directing, Fletcher Paulsen as assistant director and Bataoel once again in charge of the design side, as campers work on memorizing lines, rehearsing their scenes and learning "set building, painting, prop creation, choreography" and other aspects of theater.

After all of that work, they will have a finished Thoroughly Modern Millie up and running (and tapping) in two evening performances on Friday, July 22nd, and Saturday, July 23rd. Keep an eye on the LeRoy Music Boosters Facebook page for more information as the kids of LeRoy put their Millie together.
Posted by JulieK at 1:22 PM