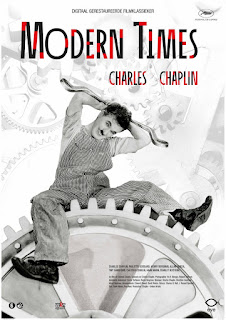 The Normal Theater took some time off in July, but they'll be back August 2 with Charlie Chaplin's Modern Times as their Tuesday Night Classic.

And this one is absolutely, positively a classic, as Charlie's Little Tramp gets caught in the big machinery of the modern industrialized age. Paulette Goddard plays Charlie's love interest, an orphan who stole a loaf of bread and is now fleeing from the police.

Although Modern Times was made in 1936, it's still mostly silent, which was definitely something different in its time. When the film was re-released in 1972, Roger Ebert described the sound in the film this way:

"[Chaplin] hit upon an effective way to introduce sound without disturbing his comedy of pantomime: The voices in the movie are channeled through other media. The ruthless steel tycoon talks over closed-circuit television, a crackpot inventor brings in a recorded sales pitch, and so on. The only synched sound is Charlie's famous tryout as a singing waiter; perhaps after Garbo spoke, the only thing left was for Charlie to sing."

One might argue that Chaplin's movies sing even without sound, but Ebert's point is well taken. Part of the film's sound not mentioned by Ebert is the song "Smile" -- another classic -- introduced in Modern Times as an instrumental piece written by Chaplin himself. The famous lyrics (about smiling "though your heart is aching") weren't added till 1954, by John Turner and Geoffrey Parsons, but you should recognize the iconic music when you hear it in Modern Times.

Look for Modern Times at 7 pm on Tuesday, August 2, at the Normal Theater. Friends of the Normal Theater are invited to attend free. Tickets are $7 for general admission and $5 for students or children under 13.
Posted by JulieK at 1:22 PM