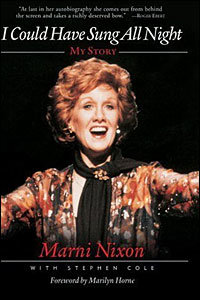 When I heard yesterday that Marni Nixon, whose singing voice elevated the screen performances of countless actresses, had passed away yesterday, I mentioned it to a friend who enjoys movie musicals. She had never heard of Marni Nixon. That was the whole point in Nixon's heyday -- to have her voice sub in for performers as different as Deborah Kerr, Audrey Hepburn and Natalie Wood while maintaining the illusion that they were singing for themselves. For the 1961 film West Side Story, Nixon not only sang Maria's songs for Natalie Wood, but added high notes for Rita Morena as Anita, too. She also provided high notes for Marilyn Monroe on "Diamonds Are a Girl's Best Friend" and sang for Jeanne Crain, Janet Leigh and Sophia Loren, among others.

You'll find Nixon (or at least her voice) in movies like Joan of Arc, The Secret Garden, Gentlemen Prefer Blondes, Cinderella, The King and I, An Affair to Remember, Boy on a Dolphin, West Side Story, My Fair Lady and The Sound of Music, where she actually appeared on screen as one of the nuns singing "How Do You Solve a Problem Like Maria?" She earned the nickname "The Ghostess with the Mostess" from Time Magazine and appeared on "To Tell the Truth," where she didn't get to sing, but the panelists did make fun of the fact that Nixon was contractually barred from revealing a great deal of her work.

On stage, she appeared in The Girl in Pink Tights in 1954 and played Eliza Doolittle in a 1964 revival of My Fair Lady at New York's City Center, along with several roles on Broadway in the new millennium.

There's a Marni Nixon medley on Youtube so you can hear some of her work put together, from "I Could Have Danced All Night" to "Tonight" and "Shall We Dance." Different accents, different characters, different actresses she was dubbing while they pretended they could hit those high notes.

Although she clearly had some reservations about the way Hollywood had used her talents without credit, telling the New York Times that "It got so I’d lent my voice to so many others that I felt it no longer belonged to me," she seemed to have made peace with her claim to fame, going on tour with "Marni Nixon: The Voice of Hollywood," a one-woman show with all the hits she'd sung, and telling her story in her autobiography, I Could Have Sung All Night. And, yes, she had a ghostwriter, one she credited on the title page.