One of This Year's MacArthur "Geniuses" Is Playwright Branden Jacobs-Jenkins

Playwright Branden Jacobs-Jenkins, whose plays are marked by their originality of expression, provocative ideas and upending of history, has been announced among the 23 fellows selected this year to receive the MacArthur Foundation's "Genius Grants." 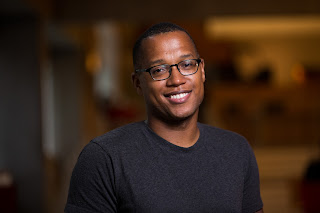 In singling out Jacobs-Jenkins, the MacArthur Foundation noted:


"Many of Jacobs-Jenkins's plays use a historical lens to satirize and comment on modern culture, particularly the ways in which race and class are negotiated in both private and public settings. Although the provocation of his audience is purposeful, Jacobs-Jenkins's creation of unsettling, shocking, often confrontational moments is not gratuitous; these elements are of a piece with the world he has established on stage and in the service of the story he is telling."

That goes to the heart of what is so special about his work, but what is so hard to express. In plays like Neighbors, Appropriate, An Octoroon and Gloria, he takes American culture and history -- including the history of theater -- and complicates it, tossing it in the air and remaking it before your very eyes. Oh, I see, you say to yourself. That's not what I thought going in. It looks different now... The theatricality of his expression reshapes your imagination. And isn't that what theater is for?

If Neighbors and its "minstrel show next door" is outrageous and shocking, Appropriate is more subtle in the way it puts our country's dark racial history front and center, An Octoroon is both funny and clever as it reworks an old piece of Americana, and Gloria moves to the work place to look at a different kind of dysfunctional family. They're each different, probing and insightful.

And they make Branden Jacobs-Jenkins a perfect "genius" to celebrate.
Posted by JulieK at 4:30 PM