Do you need a little Christmas, right this very minute? The Pantagraph's Holiday Spectacular, which features "[b]eautiful singing, hundreds of sparkly costumes, laughter and tears and lots of heart," returns to the Bloomington Center for the Performing Arts on December 1, 2 and 3. The Friday performance begins at 7:30 pm, with 2 pm matinees on Saturday and Sunday.

As in years past, Illinois State University professor Lori Adams directs this Holiday-palozza of entertainment, with Michael Schneider and Angela Bargmann as musical directors and Stacy Terry and Janet Hayslip as choreographers. Nancy Steele Brokaw has once again written the story for the musical and Marcia Basolo is back for her 16th year as executive producer. 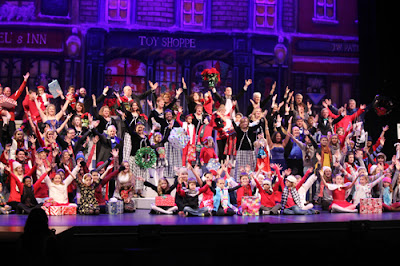 We are assured that many audience favorites -- from "precision-dancing Toy Soldiers" to an "enormous all-cast Santa medley" and "mass choir Nativity" -- will be back, with new features to keep the production fresh.

You can get tickets in person at the Bloomington Center for the Performing Arts box office, by phone (with an added charge) at 309-434-2777, or online at the BCPA website.
Posted by JulieK at 11:06 AM