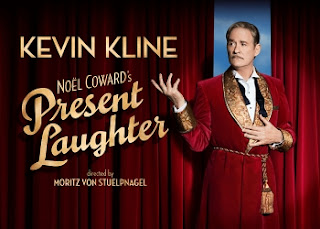 The Great Performances series on PBS is giving us a sparkling set of choices this fall, with a lighter-than-air musical She Loves Me last month, a look behind the curtain at Lin-Manuel Miranda's In the Heights and Hamilton, Paula Vogel's fierce new play Indecent later this month, the stage version of an old Fred Astaire/Bing Crosby movie Holiday Inn closer to Thanksgiving,and tonight's Present Laughter, with Kevin Kline in a revival of the Noel Coward comedy.

Coward wrote Present Laughter (that's the adjectival "present" in the sense of  "occurring right now," not the verb or offering laughter up on a platter) just before World War II, directing and starring in the original production a few years later. It's hard not to see the character of Garry Essendine, a charmingly egocentric actor with a grand manner and a life full of overly dramatic complications and hijinks, as Coward himself, even though a host of great actors, from Simon Callow to Albert Finney, Frank Langella, Ian McKellen, Peter O'Toole, George C. Scott and even John Gielgud in a radio version, have tried to make Mr. Essendine their own.

Moritz von Stuelpnagel directed the latest Broadway revival with Kevin Kline, whose supporting cast includes Kate Burton, Kristine Nielsen, Reg Rogers and Cobie Smulders. This Present Laughter played at the St. James Theater from April to July of this year, and the role of Garry earned Kline his third Tony Award. Trivia note: Burton, who plays Garry's wife in this production, was the ingenue back in 1982 opposite George C. Scott.

As with She Loves Me, Present Laughter will air in the Friday evening Great Performances slot on most PBS stations. You can find it locally on either WTVP or WILL at 8 pm tonight (that's Central time) and if you can't get to a television, it's also streaming online. You'll also find a video preview, a scene demonstrating Garry's way with a dressing gown, Cobie Smulders acting slinky, and the director, producer and several cast members talking about the play and Kevin Kline.
Posted by JulieK at 1:11 PM