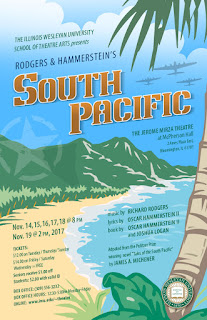 Long before Hamilton piled up all those Tony Awards and took home the Pulitzer Prize for Drama, before it started a dizzying war for tickets that fueled scalpers and prompted outrage at its high prices, Rodgers and Hammerstein's South Pacific did it all first. After its Broadway opening in 1949, it ran for five years and 1925 performances, with Tony Awards for Best Musical, director Joshua Logan, its score (Rodgers), libretto (Hammerstein and Logan), producers (Hammerstein, Rodgers, Logan and Leland Hayward) and scenic design (Jo Mielziner) as well as for stars Mary Martin and Ezio Pinza and supporting performers Juanita Hall and Myron McCormick. The original cast recording sold over a million copies.


South Pacific represented Rodgers and Hammerstein's musical translation of the short stories in John Michener's Tales of the South Pacific. Michener's stories focused on the cultural, financial and military interaction between indigenous peoples, immigrants and the global powers setting up operations on top of them, all things he saw when he himself was stationed in the South Pacific during World War II.

The musical South Pacific offered songs like "Some Enchanted Evening," "Younger Than Springtime," "I'm Gonna Wash That Man Right Out of My Hair," "There Is Nothing Like a Dame," and "Bali Ha'i," as characters Michener had created fell in love and faced danger against a multicultural backdrop. Its messages of tolerance and acceptance, of looking for understanding instead of hatred, is why South Pacific won its Pulitzer.

For Illinois Wesleyan University's School of Theatre Arts, professor Scott Susong directs a cast that includes Emily Hardesty and Madison Steele rotating in the role of Ensign Nellie Forbush, the cock-eyed optimist from Arkansas with a racist streak hidden under her nurse's uniform, with Timothy P. Foszcz as Emile de Becque, the wealthy planter Nellie falls for. There is, of course, a conflict between them -- the fact that he has two biracial daughters. As Nellie's "carefully taught" prejudice is revealed, the show's themes come into focus.

The other plotline with a culture clashe at its heart features Holden P. Ginn as handsome young American Lieutenant Cable and Megan Lai and Juna Shai alternating as Liat, his local love interest. Paola Lehman and Kira Rangel also alternate as Liat's mother, Bloody Mary, the Tonkinese woman who makes a living selling trinkets and junk to U.S. servicemen, with Connor Wildelka donning the coconut bra of Luther Billis, the rowdy Seabee who always has his eye on the main chance.

South Pacific opens tonight at 8 pm in the Jerome Mirza Theatre at McPherson Hall on Ames Plaza on the IWU campus in Bloomington. Performances continue until the matinee on Sunday, November 19 at 2 pm. For more information on this production, click here or here. For ticket information, call the School of Theatre Arts box office at 309-556-3232 or visit this box office page online.
Posted by JulieK at 11:51 AM