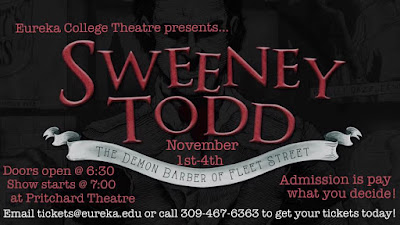 Attend the tale of Sweeney Todd.
His skin was pale and his eye was odd.
He shaved the faces of gentlemen
Who never thereafter were heard of again...

Stephen Sondheim's lyrics for the musical Sweeney Todd: The Demon Barber of Fleet Street explain most of the show right off the top. There it is, the story of a barber who seeks razor-sharp revenge on those who wronged him in the past.


And what if none of their souls were saved?
They went to their maker impeccably shaved.

Dark humor, murder and mayhem, the most clever and sardonic of lyrics, all sung to Sondheim's terrific score, with Hugh Wheeler's book and Sondheim's songs bringing in meat pies made of people, an operatic barbering contest, a depraved and evil judge, an innocent ward sent to the booby hatch, and 19th century London characterized as a hole in the world like a great black pit.

Isabella Anderson, a student at Eureka College, will be directing this dark, delightful musical for four performances in Pritchard Theater on the campus at Eureka College starting tonight. Performances begin at 7 pm November 1, 2, 3 and 4, with no set ticket price. Instead, it's "Pay What You Decide." To reserve tickets, you can email tickets@eureka.edu or call 309-467-6363 to reach the ticket office.

For more information on Sondheim and Wheeler's Sweeney Todd: The Demon Barber of Fleet Street,  click here. Note that the stage musical is not the same as the watered-down, blood-drenched film version from 2007 starring Johnny Depp. The real Sweeney Todd, with all its music intact and people who can actually perform the songs the way they were intended, is much, much, much, much, much better. Like night and day better.
Posted by JulieK at 12:33 PM