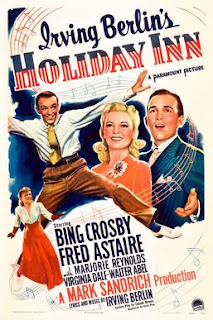 The Fred Astaire/Bing Crosby film musical Holiday Inn is generally considered a Christmas movie, probably because it's the place where Irving Berlin introduced (and won an Oscar for) the song "White Christmas." As a result, the 1942 Holiday Inn invariably shows up on television and in art-house and vintage movie theaters as part of their end-of-the-year schedules, even though in reality the movie covers all the holidays. You can see the 4th of July spirit in the poster at left.

In the film, Bing plays a singer ("I'll Capture Your Heart Singing") who wants out of his competitive show biz partnership with Fred Astaire (he's the one who captures your heart dancing, naturally). Bing decides to retreat to the country and live on a farm. Then he has the idea to turn the farm into an inn (Holiday Inn, naturally) where he can perform only on holidays. He'll loaf the rest of the time, but put on a show for Thanksgiving, Christmas, New Year's Eve, Lincoln's Birthday, Valentine's Day, Washington's Birthday, Easter... Basically whichever holidays Irving Berlin was inspired to write songs for. The plot hangs on those holidays, as Bing gets a romance in the form of Marjorie Reynolds, ex-partner Fred pops up at the Inn at an inconvenient time, their rivalry rekindles, and each gets the chance to shine in multiple numbers.

The movie came out in 1942, but didn't get translated into a Broadway show until 2016. The Broadway version imported Irving Berlin hits like "Blue Skies" and "Cheek to Cheek" from other Astaire and Crosby vehicles and thankfully took out "Abraham," which was performed with blackface in the movie, but the basic plot idea with its singer/dancer rivalry over romance and the inn in the country is still there. On Broadway, Bryce Pinkham took the Crosby role, while Corbin Bleu tapped into Astaire's shoes. Yes, that sounds a lot less starry, but they compensated with big production numbers and a whole lot of splashy costumes and sets in eye-popping colors. If you'd like to see for yourself, a performance of that Broadway version has been filmed to show on movie screens as well as through PBS Great Performances and its Friday-night Broadway's Best series. 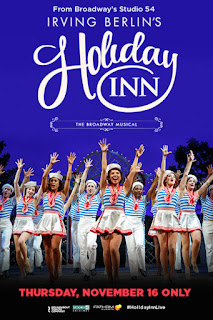 Tonight is the night for the Broadway Holiday Inn on big screens as a Fathom Event. Around here, you have the option of 7:30 pm screenings at Willow Knolls 14 in Peoria, Savoy 16 outside Urbana, or Springfield 12. If that doesn't work in your schedule, never fear. PBS has your back. They'll be showing the same Holiday Inn on the small screen, which you can watch in the privacy of your own home, on Friday, November 24, at 8 pm Central time. After that, you can expect it to stream at pbs.org on this Episodes page.

And if you are more into Bing and Fred and the original Holiday Inn, the Normal Theater will show the 1942 film on that same Friday, November 24, at 10 pm, as well as Sunday, November 26, at 1 pm. Or, if you want to see Bing and Fred on your own telly, Turner Classic Movies has a January 1, 2018 option at 7:30 am Central time.

That means you can see the boffo technicolor Broadway show and the classic black-and-white movie, both on the big screen or the small screen, and compare/contrast to your heart's content.