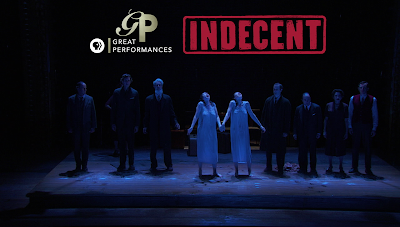 When Sholem Asch's play The God of Vengeance opened on Broadway in 1923 -- in English for the first time after many performances across Europe in Yiddish -- the entire cast was arrested on charges of indecency. Why? Asch's story centered on a Polish Jewish man named Yekel*, conflicted by issues of faith as he kept a brothel on the floors beneath his family apartment. But the real kicker, the reason prominent actors like Morris Carnovsky and Sam Jaffe got hauled down to the pokey, was the lesbian part of the story. Asch wrote Yekel's daughter falling in love with a young prostitute from downstairs, including a beautiful and tender scene in the rain ending in a kiss between the two women. And that was simply too much for the authorities.

Playwright Paula Vogel took up the story surrounding Asch and The God of Vengeance in Indecent, a poetic and powerful play that marked Vogel's first Broadway production. That's remarkable in itself, that it that long to get to Broadway for someone like Paula Vogel, with a Pulitzer Prize for Drama to her credit for How I Learned to Drive, an Obie for The Baltimore Waltz, a pile of other awards and honors, and an illustrious career teaching playwriting (and chairing the department) at the Yale School of Drama.

Indecent ran for 128 performances at the Cort Theatre, closing August 6, 2017, with Tony Awards for director Rebecca Taichman and lighting designer Christopher Akerlind, and Tony and Drama Desk nominations for the play itself. Part of what Indecent deals with is the ephemeral nature of theater. In a beautiful image in Taichman's production, the Vengeance actors show us how they and their play turned to ashes, lost in the Holocaust after they returned to Poland. But Indecent is also about the echoes that remained after the production of The God of Vengeance was physically gone. After all, Indecent reminds us that the play did change the lives of the people involved in it, especially the narrator in the piece, a stage manager named Lemml, who continues to tell us exactly that. The God of Vengeance and its kiss in the rain did imprint itself on the audiences who saw it, and it has even been performed again in Yiddish.

Luckily for all of us, a performance of the Broadway production of Indecent was filmed last August so that it could be shared and replayed. Indecent was broadcast last Friday in the regular Great Performances slot on PBS stations, but it is also streaming right now and there are reports it will also be available on BroadwayHD.com early next year.

I feared Indecent might lose some of its intimacy or its power on the small screen, but it translates beautifully. Central performances from Richard Topol as Lemml and Katrina Lenk and Adina Verson as the two women in the rain are especially strong and especially moving. Mimi Lieber, Max Gordon Moore, Tom Nelis and Steven Rattazzi play many roles, creating a seamless ensemble that brings impressionistic scenes from Vengeance and the larger picture of Indecent to life.

Taichman's staging makes the most of music by Lisa Gutkin and Adam Halva, which sets the tone as it adds joy and energy, while projections designed by Tal Yarden contribute a Brechtian note to the theatrical proceedings. A nod to the Yiddish culture that informed Asch's Vengeance and the major culture clash that arose when the Eastern European Jewish immigrants got to New York comes off both poignant and timely.

On stage or on screen, Indecent is lovely, with a depth and tenderness that makes it unforgettable.

*The character has also been called Yankl or Yankel.
Posted by JulieK at 1:32 PM