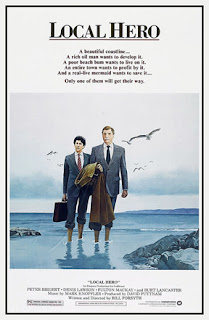 Happy St. Andrew's Day! Not the golf course. This St. Andrew's is a holiday, Scotland's national day. Turner Classic Movies is celebrating St. Andrew's Day by offering a line-up of movies with connections to Scotland, with Wee Geordie, about a Scots boy who competes in the Melbourne Olympics, a comedy directed by Alexander Mackendrick called either High and Dry or The Maggie, something called Cruise of the Zaca, then The Master of Ballantrae, and, of course, Brigadoon, the one everybody thinks of first when they think "Scottish movie."

But the really special movie on the schedule is Local Hero, a lovely little piece from 1983 written and directed by Bill Forsyth. It stars Peter Riegert as an American businessman sent to a small fishing village on the coast of Scotland by his tycoon boss, played by Burt Lancaster. Riegert's character, called Mac, is supposed to be securing land to provide a base for Lancaster's company to drill for oil in the North Sea. Most of the locals are happy to help out, their eyes on the money Mac is offering, but one cranky old gent who lives in a shack presents an obstacle. And, as they say, complications ensue as Mac stays on in Ferness. Eventually the boss flies in to see what the delay is all about, adding to Mac's problems. Denis Lawson, Fulton Mckay and Peter Capaldi are part of the citizenry, as is Jenny Seagrove as a young woman named Marina who may or may not be a mermaid.

That mystery about the mermaid gives you a hint of the movie's off-beat humor and charm. It's not so much about a fish out of water, a brash American at sea in Scotland, but a story about a fairly good guy who discovers that he may not want what he thought he wanted, that there may be things in life he hasn't been paying attention to in his climb to the top.

Local Hero is a terrific movie, small but mighty, not unlike Comfort and Joy, another gem from Bill Forsyth. I don't know what's happened to Forsyth since he stopped making movies somewhere around 1999, but I wish he'd done more. There's nobody like him. And there's nothing like Local Hero. The scenery is gorgeous, Mark Knopfler's score is wonderful, and Forsyth's script and direction bring out the best in Reigert, Lancaster and Lawson.