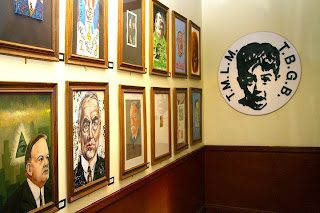 Chicago's Neo-Futurists, the troupe responsible for the long-running "Too Much Light Makes the Baby Go Blind," have announced that they're looking for portraits of President Barack Obama (or one portrait, at any rate) to add to their "Hall of Presidents."

They've got a piece of art for each and every U.S. president so far, ranging from a tiny bust of George Washington placed next to a tiny set of false teeth to a collage of pitted cherries on paper representing Zachary Taylor. You can see Herbert Hoover and Warren G. Harding looking a bit more like themselves in the picture of the entire display above, but beware Eisenhower, who looks kind of zombiefied, and W, who has an oil well spouting out the top of his head. 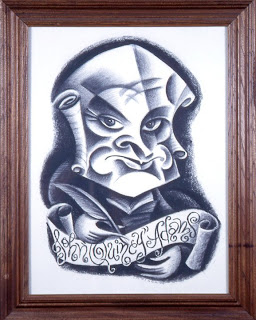 If you can create the winning Obama (submissions due September 24th), you could win $250 from the Neo-Futurists, and your portrait will hang alongside all the others in their Hall of Shame. Er, Fame.

Judges include Miss Mia, the host of "Chic-A-Go-Go," several gallery owners, a member of the Neo-Futurists ensemble and Oli Watt, faculty member at the School of the Art Institute of Chicago, whose own art appears in the Hall of Presidents in the form of George W. Bush and his oil wells.

For all the details, visit the Neo-Futurists and be sure to take a look at all the presidents already on display. They're wacky! They're scary! They're funny! They're inspiring! They're depressing!

Note that nobody has done Peeps or macaroni portraits yet, so the field is wide open.
Posted by JulieK at 12:04 PM