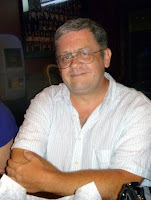 I asked Kevin Wickart (pictured at left), someone I know from his stellar performances in ten-minute plays, to tell me a little bit about "I'll Be Seeing You," the 1940s-style revue Kevin is appearing in with Prairie Fire Theatre. Here's what Kevin had to say...

Take exciting arrangements of World War II-era pop music – a lot of swing, a touch of the blues, and a dash of boogie woogie – wrap it up it up in a lighthearted story by Nancy Steele Brokaw, serve it up on some of the best voices in town, and what have you got? You've got "I'll Be Seeing You," Lloyd Farlee's tribute to the music of the 1940's. A cast of ten vocalists (including yours truly) and a six-man instrumental combo delivers Farlee's jazzy arrangements of old standbys like "Rock-A-Bye Your Baby," "Chattanooga Choo Choo" and "Blue Moon." Soloists and smaller groupings offer up songs such as "Boogie Woogie Bugle Boy," "Slow Boat to ," "Someone to Watch Over Me" and "Comin' In On a Wing and a Prayer." The show includes thirty songs, nearly all of them arranged by Farlee.

Here's the story: The "Prairie Fireside Theatre" troupe, led by Bobby Mingle (Bob Mangialardi), is looking for ideas for their next show – something that could take them to or even Broadway. The mostly young members all want to do a show featuring 1940's music, but Bobby doesn't think that there's an audience for it. After finding a box of Lloyd Farlee's arrangements of war-era songs, the members – led by 1940's aficionado Ike (Mike Schneider) and young ingénue Deenie (Dana Anderson) –convince Bobby to mount the show. Weeks later they perform it before a live audience, uncertain as to its fate – until Bobby receives information that could drastically change their lives.

But even in the rush of preparing a new show there's time for drama, romance and intrigue. Bobby's wife Mandy (Mindy Mangialardi) isn't thrilled about losing her husband to Yet Another Musical, but taking an "if you can't beat 'em, join 'em" attitude, and being no slouch in the vocal department herself, she adds her talents to the mix. Meanwhile love is blooming as the tomboyish Carly (Chelsey Coombs) tries to attract the attention of the almost terminally oblivious Skeebo (Matt Skibo), with the help of the older, world-weary diva Miss Christie (Cristen Susong). In similar fashion Smitty (Jonathan Smith) unexpectedly finds himself falling for the bubbly-but-ditzy Amulele (Aimee Kerber). Adding a little mystery to the mix is the presence of newcomer Wick (that would be me), a retired accountant who shows up unexpectedly in the middle of the opening number.

Producer/Director Bob Mangialardi and Musical Director Steve McClary are both friends and former students of Lloyd Farlee, so for them this show is a labor of love. They have often spoken of the joy of finding so many vocal "gems" among the cast, which are given their chances to sparkle in numerous solo numbers. All are excellent, but if there's a standout it has to be Cristen Susong. Her clear, pure tone has a strength that makes her featured songs "Bewitched or If I Love Again" and "The Joint is Really Jumpin'" unforgettable.

And what do I get to do, you ask? As Wick, I sing in all the ensemble numbers including a brief (but critical) solo turn in "Chattanooga Choo Choo." I also get to perform an all-male arrangement of "Embraceable You," as well as singing the Lead part in our barbershop-style rendition of "Comin' In On a Wing and a Prayer." Bob and I sing (and dance!) a duet to a mashup of "April Showers" and "Singin' In the Rain;" but my big moment is a solo performance of the Gershwin/Weill patter song "Tchaikovsky (and Other Russians)". This number is from the musical "Lady In the Dark," and was a staple of Danny Kaye's repertoire for decades.

Though all of the solo and smaller ensemble work is excellent, it is the nine full-cast numbers that demonstrate the real talents of the cast, crew, and arranger. They are what audiences are most likely to remember for years to come. Doc would be proud.

Lloyd Farlee, or "Doc," as he was known to his friends and students, was an icon of the Music Department at . He joined in 1962, teaching varied courses as well as giving voice lessons for more than a quarter of a century. But his unquestioned passion was for the Men's Glee Club, which he directed for 15 years. He served on the board of Prairie Fire Theatre and wrote three musicals for them, including "I'll Be Seeing You." His love of music carried through his World War II Army service, leading him to turn his considerable talents as a composer and arranger to the music of the 1940's. Doc passed away in December of 2007, but his music, his passion for life, and the memories of him as teacher, mentor and friend continue to be passed along to new generations.

"I'll Be Seeing You" runs through August 15th, with all performances at the 1st Presbyterian Church of Normal, 2000 East College Avenue. Visit Prairie Fire's website, linked at left, for more information or to make reservations.
Posted by JulieK at 6:58 PM