Watch Out for the Zombie Invasion -- August 31! 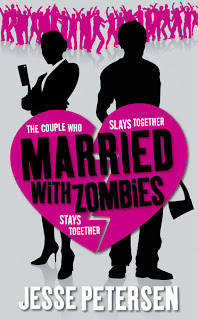 My friend Jesse Petersen, who has written a lot of historical romances and erotica under other names, is now doing cool zombie books under her very own name. The first in her zombie series was supposed to come out in September, but Amazon.com is now telling me it's available August 31, which classifies it as August news, don't you think?

So here's a look at Jesse's adorable "Married with Zombies," in which Sarah and David attempt to keep their shaky marriage going at the worst possible time, a Zombie Apocalypse. First their marriage counselor goes over to the undead side, and that seriously affects her ability to offer guidance, you know? And all the gore and horror around them is putting even more of a strain on the relationship. Bickering over whose turn it is to wash the dishes pales in comparison to complaints about not properly securing the doors against the undead! Keeping their wits (and their brains) about them won't be easy, but hopefully the couple who slays together stays together.

Will Sarah and David make it out alive? Will their marriage crumble before their brains get eaten? We'll all find out August 31st.

I will talk more with Jesse in this space when it's closer to her lay-down date, but I wanted to whet your appetite now for her fun and fierce zombie marriage manual.
Posted by JulieK at 12:35 PM