Fall (or Crumble) into the New Semester of IWU Theatre

Illinois Wesleyan’s School of Theatre Arts has announced its 2010-11 schedule, with “Crumble (lay me down Justin Timberlake)” kicking off the season in September at McPherson Theatre (seen below). 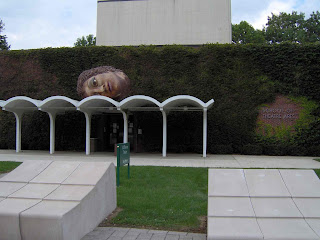 Crumble (lay me down Justin Timberlake) by Sheila Callaghan
Directed by Dani Snyder-Young
September 21-25 at 8 pm, September 26 at 2 pm
McPherson Theatre
When it played at the Cleveland Public Theater, “Crumble” was described as a “quirky comedy about an old house and Janice, a twelve year old girl whose Christmas wish list includes bleach, paraffin and other bomb-making materials. It's been a year since the untimely death of Janice's father, and to deal with it all, she holds spiteful conversations with her dolls and dreams of Justin Timberlake, while her mother fantasizes about Harrison Ford and relies on her superior baking skills to hold herself together. Throw in an apartment that starts to plot murder and you're left with a wild and crazy ride to redemption and healing.”

Once Upon a Mattress, with music by Mary Rodgers and lyrics by Marshall Barer, and book by Jay Thompson, Dean Fuller and Marshall Barer
Directed and choreographed by Scott Susong
November 17-20 at 8 pm, November 20-21 at 2 pm
McPherson Theatre
“Once Upon a Mattress,” a musical adaptation of the Hans Christian Anderson fairytale The Princess and the Pea, opened on Broadway in 1959 with Carol Burnett as Princess Winnifred, a noisy, gawky sort of girl who swims across the moat to get to the castle to woo Prince Dauntless. She is tested (with the old pea under the mattress trick) to see if she’s the right girl for the prince. Fun, fizzy musical hijinks ensure.

The Trojan Women by Euripides
Directed by Tom Quinn
February 15-19 at 8 pm, February 20 at 2 pm
McPherson Theatre
Fresh off the movie he was filming around Bloomington-Normal, Tom Quinn directs this classical tragedy about what happens to the women of Troy in the aftermath of a terrible war. Their city lies in ruins, their husbands have been killed, and everyone left behind will be enslaved as spoils of war. Modern versions have been done (I saw one set in 1950s Eastern Europe ten or fifteen years ago, with the Trojan wives in Donna Reed dresses, beating out their sorrows on fetching little train cases instead of drums), illustrating the notion that war and its destructive power never go out of style.

Spitfire Grill, with music, lyrics and book by James Valeq and Fred Alley
Directed by Nick Reinhart
May 20-21 at 8 pm, May 22 at 2 pm
E. Melba Kirkpatrick Laboratory Theatre
Based on the 1996 film starring Alison Elliott and Ellen Burstyn, “Spitfire Grill” tells a story about a young woman released from prison who tries to make a fresh start working at a restaurant in a small Maine town called Gilead. (The name of the town is not the only thing with religious or Biblical significance in the story.) Our young ex-con is a catalyst for change in the town and its citizens in this story of human connection, sacrifice and redemption. The musical version came to New York’s Playwrights Horizons in 2001, adding songs and a happier ending to the original material.

One more show will be added later, to be directed by Nancy Loitz in March at the E. Melba Kirkpatrick Laboratory Theatre. Once IWU’s semester begins, you can reach the box office at 556-3232.
Posted by JulieK at 9:12 AM