"Dr. Strangelove" Still Potent After All These Years 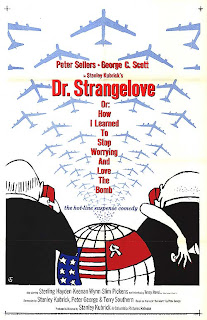 I was going to start this out by suggesting that had, indeed, learned to stop worrying and love the bomb, as "Dr. Strangelove" tells us in its subtitle. I remember the Civil Defense Shelter at the Health Department where my dad worked back in the 60s, as if we could all pile in there in case of nuclear attack. We also had drills at school, where we were told you could hide under your tiny little desk and be safe from the Big One. I certainly hope you don't see that anymore.

But in the wake of terrorist scares, I feel certain that bomb shelters and piles of canned goods and bottled water aren't going anywhere. Survivalists may be looking for backpack bombs or the Apocalypse instead of a sneak attack from the Russkies, but they still think the end of the world is imminent, and they share the philosophy of Dr. Strangelove himself, who counsels going underground and starting a new civilization of just the cool kids like himself. Ten women for every man! Lots and lots of sex to people the new world! It’s thrilling stuff for generals and politicians.

I think I first saw "Dr. Strangelove" back in the late 70s, when I was in college, and I thought it was hilarious and not scary in the least. That's a little strange, considering we were still in the midst of the arms race and discussions of “mutual assured destruction” then, but maybe it was the folly of youth, or a kind of post-traumatic-stress giddiness that came from being a child during the Cuban Missile Crisis, three horrific assassinations and the Viet Nam War.

Or maybe it was just that Stanley Kubrick clearly intended the film to be funny, and there's no other way to look at Peter Sellers in three different roles, including the titular wheelchair-bound German rocket scientist called Dr. Strangelove; George C. Scott in the most over-the-top performance of his career (yes, even more than Patton) as a gung-ho Air Force general; Slim Pickens in the best performance of his career as a down-home cowpoke of a fighter pilot; and Sterling Hayden as a psycho nutball with a thing for precious bodily fluids. Kubrick and screenwriter Terry Southern gave us characters named things like Jack D. Ripper, Buck Turgidson, Bat Guano and T.J. “King” Kong, cluing you in right there that it's supposed to be a comedy.

This time, with more hours ticked off my inner Doomsday clock, I still found it funny, but really frightening, too. Maybe some things have changed. But not nearly enough. I guess I do believe that one crazy general – or one crazy anybody, really – can destroy the world. We may’ve cooled our jets on nuclear weapons, but more, smaller, less stable countries have picked them up, global warming is screwing things up, anyway, and... Yeah, the world is every bit as scary as when Kubrick put together this chilling, hilarious, amazing movie.

The plot is simple – a general (that would be Jack D. Ripper, played with relentless insanity by Sterling Hayden) who thinks fluoridating the water is a Russian plot issues an order to an entire wing of bombers to set forth and drop their nukes. Once his superior, General Buck Turgidson (George C. Scott in gum-chomping, wild-eyed glory) discovers what’s happened, he tells President Merkin Muffley (another of Sellers’ roles, apparently based on ’s own Adlai Stevenson) and the rest of the War Room, and they scramble to find the code to get the bombers to turn back. Meanwhile, Group Captain Lionel Mandrake (the third Peter Sellers’ role), a British RAF officer assigned to General Ripper, has realized that Ripper has gone off the rails, and he, too, attempts to get the code. In one of the film’s best and silliest scenes, Mandrake tries desperately to make a phone call to the president the old-fashioned way, by feeding quarters into a pay-phone, with very little help from Keenan Wynn’s bull-headed Colonel Bat Guano.

Kubrick does a terrific job racheting up the suspense, even if you already know the ending. I found myself worrying about the men in the fighter plane (including Slim Pickens and James Earl Jones), and about poor President Muffley and Captain Mandrake, who keep trying to do the right thing. With the Doomsday Machine looming in their future, it really doesn’t matter if they’re nice or loony tunes or evil, but I was biting my fingernails worrying about them nonetheless.

For a film about the fecklessness of people who put too much faith in machines, “Dr. Strangelove” still sets up wonderful characters. Humanity on parade, with all its foibles. One man and the machinery he puts in motion can blow up the world, but the bombs didn’t do it by themselves, did they?

I’m not a big fan of “2001: A Space Odyssey,” even though the message is somewhat the same. But there’s no denying the brilliance of “Dr. Strangelove” or the performances in it. It has its own style, from the credits to the visual pictures to the amazingly evocative music. (The use of “When Johnny Comes Marching Home Again” is genius all by itself.) And that style works. Brilliant. Scathing. Darkly funny. So, so very dark.

“Dr. Strangelove” has got to be seen. You have one more chance to catch it on the big screen at the Normal Theater tonight at . Seriously. Don't miss it.