Guster is Easy and Wonderful at Lincoln Park Zoo

Please welcome Scott Johnson, my husband, who is guest-blogging about Guster at Lincoln Park Zoo, a concert we attended last Friday night. I told him I would go with him if he blogged about the concert for me, and so he did. Scott's an excellent writer and I think you'll enjoy his Guster musings. I confess I am now a Guster convert, based both on Scott's enthusiasm and one heck of a concert. 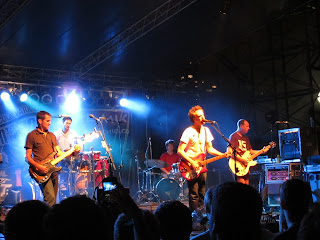 I'll be upfront about this: I lost my musical mojo around 1984. In the MTV era my LPs warped in their orange crate and my turntable froze solid from inactivity. My car rides were purposefully noiseless, broken up only occasionally by the chatter of public radio or sportstalk (when the Sox were winning). My knowledge of current acts came mostly from SNL and Letterman. So how did a 50-something whose last musical crush was Steely Dan end up jumping with both feet on the bandwagon of a quirky, onetime acoustic, now mostly alt-rock quartet from Boston?

Well, the iPod. And the ability to buy some of my favorite songs in a fourth (and final) format. And the Internet. And the ability to quickly find and try out new music. And Pandora. And Wikipedia. So I followed an odd path that bounced around slowly from Death Cab to the Shins to Weezer to Jonathan Colton and finally to Guster. And within a few minutes of listening to their music, I was hooked.

Hooks are a big part of the pop music experience. Guster writes melodic hooks in spades, adds superb musicianship, sweet harmonies, and intelligent lyrics, and rolls the whole mess into, so I had read, a great stage show. All by a band that promotes greenness. What was not to like? Checking out "Guster on Ice," the band's combined DVD/CD of a live performance in Portland, Maine, in 2003, I was inspired to do something I had not done in a generation – buy tickets to a concert.

Friday night's event took place on the grounds of Lincoln Park Zoo in Chicago on a grassy knoll full of blankets – just like the old days at Ravinia or Alpine Valley, but much more intimate. By my guess, about 1500 to 2000 Guster fans packed the small area. My fears of being the oldest dude in the crowd were quickly laid aside. Although most of the concertgoers were in their late 20s or early 30s, there were plenty of middle-aged rockers as well, including the couple next to us, who had also traveled from Bloomington-Normal to lie under the stars on a perfect evening. One welcome difference from the 70s: the almost total absence of smoke of any sort, save a few hints of pot coming from back and the left. The only other smells were bug spray, the apple-scented hand sanitizer from the Port-a-Potty, and an occasional whiff of rotting flesh, which I can only hope was coming from the nearby lion exhibit.

Guster responded to the comfortable setting with a energetic set of 20 songs. The front-stage vocal trio of Ryan Miller, Adam Gardner, and Joe Pisapia displayed their instrumental versatility by swapping between lead, rhythm, bass, and keyboards on practically every number. Adam even threw in a few toots on a trumpet late in the evening. At the back of the stage, stealing the show on occasion, was Brian Rosenworcel's frenetic, mostly stickless percussion. He was accompanied on several songs by a conventional drummer introduced only as Scooter, "rescued from Haiti."

While Guster's new album, Easy Wonderful, is due out in October, by my count the band played only three songs from it: the already released single "Do You Love Me?", "This Could All Be Yours Someday," and a third song whose title I'll have to wait to decode. The rest of the evening the band stayed close to its playlist of fan favorites, leading off with "The Captain", with echoes of the country rock of yore, to the insistent anthem of self-indulgence "Center of Attention," to the group's most recent (2006) single, the dreamy, wistful "Satellite" (which has a hypnotic video). In the shortened format (the zoo had us out and on the road home by 10:30), Guster didn't have any time for the antics that are part of some of their shows, instead strumming and drumming out crowd-pleasers such as "Careful" (the song that hooked me), "Barrel of a Gun," and "Happier," featuring Adam and Ryan's soulful counter-melodies. Only on "Airport Song," an indictment of religious cults, did the group stray very far from the recorded version, adding Darth Vader-like effects to Ryan's malevolent invocation.

I was only a little disappointed that Guster omitted their two biggest hits: "Amsterdam" and "Fa Fa." No doubt they need to give those a rest once in a while.

I've seen Guster categorized as "geek rock", but that's way off base as far as I'm concerned. There's nothing overtly geeky about the music or their act – not striving to be funny like They Might Be Giants, not defiantly against convention like Weezer, not over the top like Devo, for Pete's sake. Yes, this was a crowd I think my fellow programmers would have felt comfortable in 25 years ago. But the songs touch on broad themes anyone can relate to, and almost always with a cheerful hook and chiming guitar riff.

So why isn’t Guster a household name? Good question. They're fun, accessible, and hard-working (up to 250 dates a year). But then Guster at Assembly Hall or the Peoria Civic Center wouldn't be nearly as much of a treat as watching them play on a smooth summer evening, under the trees, with a cool breeze off Lake Michigan.

If you'd like to see what I'm talking about, use your Netflix to check out "Guster on Ice." Or watch the first three songs of the Friday's concert here, here, and here.

Thanks to Jenn Winter for the use of the concert photo. Check out her blog at jennwinter.com.

And thanks to Scott for the review!