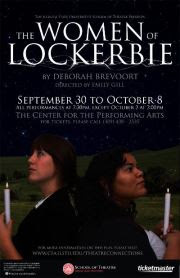 Shows opened at both ISU venues (Westhoff Theatre and the Center for the Performing Arts) last week. You still have a few chances to catch "The Merchant of Venice" at Westhoff or "The Women of Lockerbie" at the CPA, with both shows running through October 8th. You can click here to read what I thought of director Jeremy Garrett's take on "Merchant" as a comedy hovering on tragedy as pretty heiress Portia, her beau Bassanio and their rich, frivolous friends hover on the brink of the Stock Market Crash of 1929.

"The Women of Lockerbie" is an all-out tragedy (no hovering here) about the aftermath of the terrorist attack on a jet flying over Lockerbie, Scotland in 1998. ISU is augmenting the production with a visit from playwright Deborah Brevoort scheduled for Tuesday, October 4. You are encouraged to bring clothing donations to the CPA to echo the humanitarian efforts in the play.

The Discovery Walk at Evergreen Cemetery is now well underway and the weather has been beautiful so far. Performances continue next weekend at 11 and 2 on both Saturday and Sunday. My husband will be acting as a tour guide again next Saturday, so ask for Scott's tour if you want a good show from a learned guide. If you're interested in buying tickets for this historical tour around Evergreen Cemetery, with actors portraying colorful characters from Bloomington-Normal's past (this year all relating to the Civil War), you can get them at the McLean County History Museum, at the Garlic Press in Uptown Normal, or at the cemetery itself. Tickets are $12 for adults and $4 for children and students.

Eureka College opens its official fall season on October 4th, with George Bernard Shaw's "Arms and the Man," which takes a satirical look at war, heroes, idealism and romance. Oh, and a little chocolate. What more do you need? "Arms and the Man" is directed by EC Theatre Professor Marty Lynch, and continues through October 9.

The Station Theatre in Urbana brings "God of Carnage," the Tony-Award-winning play by Yazmina Reza, to its black box theater on October 6th, with performances till the 22nd. Celebration Company Artistic Director Rick Orr directs "God of Carnage," a story about two married couples trying to deal with a playground skirmish between their sons as well as their own lack of civility, with a cast that includes Jessa Thomas, David Barkley, Rachel Bradley and Jeremiah Lowry. (Extra notes: Roman Polanski has directed a film version of the script starring Jodie Foster, John C. Reilly, Christoph Waltz and Kate Winslet, and it has played to excellent reviews at the Venice and New York Film Festivals. I saw it on stage in New York, and my review of that Broadway production is here.)

Don Shandow and New Route Theatre continue their One-Shot Deal series at the Eaton Gallery in Bloomington with a performance of "Soda," a new play by Kamaya Thompson, on October 12th. "Soda" is described as a play in poetry, touching on issues "such as 'old and new racism,' minority education levels, and the path that uneducated, underprivileged youth are currently taking," and performed "in a way that challenges and provokes." A discussion will follow the performance. "Soda" is directed by Jamelle Robinson and includes Matthew Robinson, Ariele Jones, Corey Hardin, Anne Cook, Charlene Ifenso-Okpala, Matt Vlazny, Tamar Lange and Terrance Washington in the cast.

As always with New Route shows at the Eaton Gallery, seating is limited and you are advised to reserve in advance by e-mailing a request to new.route.theatre@gmail.com.

The Normal Theater begins a tribute to ISU alums with "The Bucket List" (the ISU alum involved is Sean Hayes, who plays Jack Nicholson's valet in the movie) on October 13, followed by "Best in Show," the Christopher Guest "mockumentary" about dog shows (whose cast includes ISU alum Jane Lynch) on October 14, the superhero movie "Iron Man" (with special effects by ISU alum Brian Connor) on October 15, and "Of Mice and Men," the 1992 adaptation of Steineck's novel (starring John Malkovich, a very famous former student of the ISU School of Theatre). All shows are at 7 pm.

Fresh off his stint as a somewhat crazed Civil War soldier stalking bushwhackers in the Discovery Walk, my friend Kevin Paul Wickart is directing a musical based on Neil Sedaka songs for Prairie Fire Theatre. The show is called "Breaking Up Is Hard to Do." Kevin has written a piece on that show for me, and I will be happy to share that a little later in the week, so stay tuned for that! You can catch performances of "Breaking Up Is Hard to Do" at Westbrook Auditorium in Presser Hall on the IWU campus from October 14 to 16, or in Shamrock Hall at Saint Patrick’s Church of Merna over on Towanda Barnes Road in Bloomington October 21 to 23. 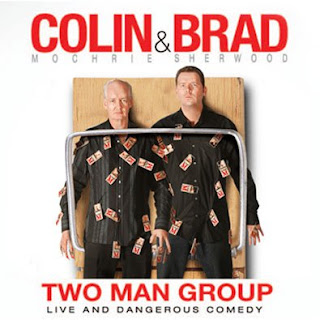 I used to be a huge fan of the British improv show "Whose Line Is It, Anyway?" and then a medium fan of the American version. If you, too, enjoy people doing the Alphabet Game blindfolded or a Kung Fu soap opera played sideways, you'll want to check out "An Evening with Colin Mochrie and Brad Sherwood" (both of whom can be seen on reruns of "Whose Line Is It, Anyway?" on the ABC Family channel) on October 15th at the Bloomington Center for the Performing Arts.

The Champaign-Urbana Theatre Company (AKA the CUTC) is offering a special "Rocky Horror Show in Concert 2" as a fundraiser at the Canopy Club in Urbana one-night only on October 22. Click here for details.

Parkland Theatre over in Champaign opens the intriguing Sarah Ruhl play, "Dead Men's Cell Phone" on October 26th. It's a popular play, with another production, directed by Rhys Lovell, taking the stage at Eureka College November 15. It's always fun to see what different directors do with the same material, so if you're looking to expand your theatrical horizons, you might want to try a compare/contrast with the two versions and report back.
Posted by JulieK at 11:07 AM