I was invited to a private screening (sort of a sneak peek) of Mike Trippiedi's new film, "Amber Rose," this week. Mike invited cast and crew (and friends of one or the other, like me) to see "Amber Rose" on the big screen at the Art Theater in Champaign, a perfect spot for that sort of thing. The Art is fairly small and intimate, with a cool indie feel, and it fit Mike's filmed-right-in-Champaign-Urbana movie to a T. 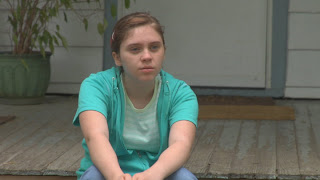 In his opening remarks, Mike told us that he wanted to make a movie about something people don't like to talk about. In that, he certainly succeeded with "Amber Rose," which is about a precocious 11-year-old (11 going on 20, according to her mom) who has to deal with a strange man who just moved in next door as well as her mother's new boyfriend. The neighbor, a man named Skip, is clearly not all there, but we don't find out what happened to make him that way at the start. He has a person living with him who purports to be his sister, but who is she really? Why does she feel the need to stick by him when he clearly did something very wrong before they got where they are now?

Even more odd is the fact that the new boyfriend, Gil, only came by in the first place because he was looking for Skip. That and the fact that he doesn't seem to have a job or connections to anybody else in town make us suspicious that there's more to the boyfriend than Amber Rose or her mother know.

Skip and Gil together add up to a whole lot of menace for one little 11-year-old. Trippiedi does a terrific job ratcheting up the tension and saying a lot with a little, as well as pulling excellent performances from his cast. Cinematographer and editor Bill Yauch deserves credit for some long, uncomfortable takes as well as compelling composition of shots.

Among the cast, Steven M. Keen as Skip and Joe Dempsey as Gil bring the creepy factor with two very different but equally riveting portraits of evil, Amy Stoch is heartbreaking as Skip's keeper, Michael Morgan is quite good in a small role as a probation officer, and Carolyn Kodes-Atkinson goes down-home as Amber Rose's aphorism-crazy mother. As Amber Rose, young Zoe Capps shows a softness and credibility that bodes well for her future career prospects. She's the heart of the movie, and she earns that position.

Trippiedi has indicated that after this private screening, he will be entering "Amber Rose" in film festivals with the hope of getting a premiere somewhere in the wider world. The film has a small-town story, but its events could happen and have happened just about everywhere. Scary stuff. Let's hope "Amber Rose" gets the attention and wide release it deserves.

There's a trailer for "Amber Rose" on its Internet Movie Database page, with Trippiedi himself appearing as the guy who asks for the beer with a monkey on the label. Try the video for a sneak peek of your own.
Posted by JulieK at 2:04 PM