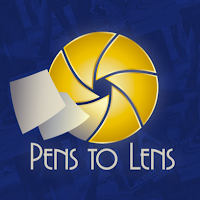 Earlier this year, the Champaign-Urbana Film Society invited kids from Champaign County in grades K-12 to submit their original screenplays in a competition they called Pens to Lens. Entries were due in February, with nine winners chosen whose stories were turned into actual, real-live short films by area directors and actors. Pens to lens, get it? Outside the nine big winners, other students who sent in screenplays were given the gift of movie poster art created by artists at CUDO, the Champaign-Urbana Design Organization, to reflect the ideas in their scripts.

And all of that art -- movies and posters -- will be on display at C-U's Art Theater tonight at the boffo Pens to Lens Awards Gala, with red carpet arrivals and everything! The winners will walk the red carpet at 6 pm, with showings of the films at 7 and 9:30. Because they are expecting a full house at 7, you are encouraged to try the 9:30 pm show if you can.

The films based on winning screenplays (as listed at the Pens to Lens site) are:

The Devil Uses Purell by Ella G.
Cassie trades the devil her soul for a hamburger but the devil makes a big fuss over it because it's not clean so Sammi and Danielle have to save Cassie from herself.

Dinner Party Antics by Aly.
Jim and Jenna are waiting outside of Jim's cousin Dave's home and are reminiscing of prior "Dinner Parties."

Even and Odd by Iona H.
Ivy and her dog Idris are invited into a parallel world by her unconscious self to help finish a quest.

Fluffystein by Maya, Madely and Taquia
A little girl's beloved toy bunny goes missing and is used for malicious purposes.

Into The Mine by Blake P. and Logan L.
Two boys are ready to mine, but someone's watching them and they don't know who.

Susan and Daisy's Adventure: Episode I by Beatrice, Catherine, David, Dennis, Jonathan, Reuben, & Saewoong
Two poor people need money to get a house so they catch an eel.

Tunnel To Greenland by Ruth C.
A young girl and boy try to dig a tunnel to Greenland to see snow and ice during the summertime.

Unexpected Trip by Jose, Taeyoon and Dafeny.
The story is about a Mexican family that experiences poverty and immigration problems as they come to the U.S.A.; it is based on a true story and it talks about the lives of illegal immigrants and what they go through.

Because I tend to fall on the theatrical side of things, I've heard about quite a few playwriting competitions for kids, as well as theaters who work with children all year long to put their work on the stage. But making movies -- in our area, at least -- is a great idea, since kids are more likely to be familiar with what a movie looks like and can accomplish. Plus, Pens to Lens offered screenwriting resources geared to specific age groups to help teachers help their students as they worked toward entering the contest. All around, pretty nifty.

You can read more about Pens to Lens at their website, in Melissa Merli's piece for the News-Gazette, or in Mathew Green's article at Smile Politely. They received 120 entries this year in the first ever Pens to Lens competition, but next year, who knows how many budding screenwriters will enter?
Posted by JulieK at 11:33 AM