I apologize for being late with my May preview. If it means you missed one of your last four chances to see Middletown at Heartland Theatre or you're getting notice really late about Illinois State University's Spring Dance Concert or Actors Showcase, well, then I am really going to have to apologize more profusely.

But, yes, whether I am prepared or not, May is upon us, borrowing April's showers, but still calling itself May.

ISU's 2013 Actors' Showcase and Design Exhibition happened officially last Monday night in Chicago, but there is a redux for local folks today at noon. I hope I get this post up in time! Break legs, ISU seniors, whether I'm in time or not. 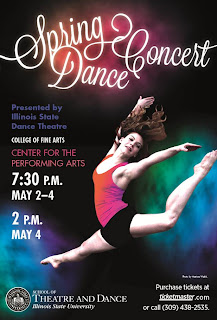 ISU is also sneaking its Spring Dance Concert in under the semester's wire. The concert opened last night, with performances again tonight and tomorrow. You have a choice of 7:30 shows Friday and Saturday, as well as a matinee on Saturday. This performance is being held during National Dance Week, and includes a special piece choreographed by guest artist Melinda Myers. For more information, click here. You may also contact the College of Fine Arts Box Office in the Center for the Performing Arts from 11 am to 5 pm today at 309-438-2535 or purchase tickets directly through Ticketmaster. 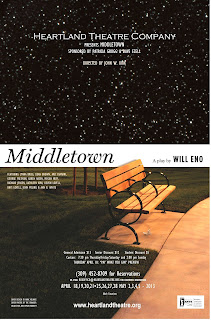 And as I said, Heartland Theatre's very well-received production of Will Eno's Middletown is in its last weekend of performances. In the play, John (Rhys Lovell) and Mary (Karen Hazen) meet on an in-between day in their in-between town, moving in and amongst fellow townspeople (and a couple of tourists) as Eno ponders the meaning of life. What does it mean to be in the middle? Lovely play, lovely performances. Get there early and grab a seat at one, two or three of these last performances.

Also this weekend, Eureka College hosts the Olio Cemetery Walk in conjunction with the Woodford County Historical Society, with student actors performing as the former citizens of Eureka. That's Sunday May 5 at the Olio Township Cemetery.

One of my favorite musicals, The 25th Annual Putnam County Spelling Bee, takes the stage at Community Players with a special Pay What You Can preview on May 9 and performances continuing through the 26th. Brett Cottone directs this good-natured look at a children's spelling contest, complete with an ex-champ who now moderates the Bee (played by Aimee Kerber), a vice principal and returning Bee judge who'd been a judge before but was banished for bad behavior (Joe McDonald), a "comfort counselor" doing community service (Chris Stanford) and six elementary school contestants, each excited to be in the Bee, but each with his or her own brand of vulnerability. For Community Players, your spellers will be played by Brian Artman, Kallie Bundy, Megan Masterman, Joel Shoemaker, Kelly Slater and Austin Travis. I make no secret of the fact that sweet Leaf Coneybear, the one who inexplicably keeps getting asked to spell rodent names, is my favorite. Go, Leaf! Win that bee! 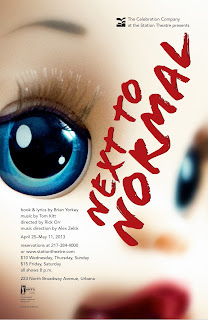 Urbana's Station Theatre has two weekend left for Next to Normal, the Pulitzer Prize-winning musical about mental illness that was also nominated for eleven Tony Awards. Station Artistic Director Rick Orr takes the reins on Next to Normal, with a cast that includes Jodi Prosser, Allison Morse, Andy Hudson, Chris Johnson, Dylan Connelley and Steve Conaton. You have until May 11 to catch this groundbreaking show. All shows are at 8 pm. You may call 217-384-4000 for reservations.


Athough last night was originally scheduled to be "Time to Make the Shakespeare," one of this season's new projects from the Illinois Shakespeare Festival, it was pushed back to next Thursday because of weather issues. So you can still catch "a Shakespearean play created entirely before your eyes by The Shakespearean Globetrotters" on the patio at Destihl on May 9 at 8 pm. Call 309-862-2337 to reserve a table for this outdoor event.

Prairie Fire Theatre is currently touring schools with its children's opera The Sky Is Falling -- And I'm Not Even Kidding! Prairie Fire promises dates and times for the general public coming soon, so watch their website for more info. In the meantime, you can enjoy this picture of the colorful cast. Is that Chicken Little I spy? Look out for Foxy Loxy!

Illinois Wesleyan University offers the play The Breach, a devastating and personal piece about the effects of Hurricane Katrina on New Orleans, as its May term project. For IWU, The Breach, which was written by Joe Sutton, Catherine Filloux and Tarrell McCraney, is directed by Raven Stubbs, with performances scheduled for May 23 to 25 at 8 pm.
Posted by JulieK at 11:26 AM