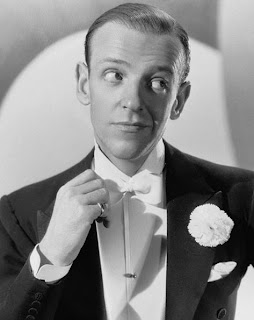 It's time for my annual Fred Astaire's birthday post! I've been missing from the blog for a few days while I finished up my second semester of graduate school, but I knew I had to get back in time for FRED ASTAIRE'S BIRTHDAY, which should totally be a national holiday. Since I don't have control over national holidays, I will keep the tradition alive by reblogging this piece right here, right now!

As it happens, I discovered last year that my husband’s grandfather, Carl Frick of St. Charles, Illinois, was born on the exact same day as Fred Astaire. As far as I know, Carl Frick wasn’t a dancer and he never considered leaving St. Charles for fame and fortune on the vaudeville circuit. Two men, born the same day in different Midwestern towns. One stayed in the Midwest and raised a dancing daughter, who had a decidedly non-dancing son (my husband). The other went east with his sister, developed a whole new style of dancing on film, and became an enduring screen legend as well as an example and inspiration to pretty much every dancer who came after him. Whether that was fate, destiny, or just the roll of the die, I'm glad Carl Frick stayed in St. Charles to raise his daughter June, and I'm glad Fred Austerlitz became Fred Astaire.

If you're looking to start your own Fred Astaire film collection, I highly recommend the Astaire & Rogers Ultimate Collectors Edition, released in 2006. It has all ten Astaire/Rogers pics on DVD, plus extras like trailers and ads, vintage shorts and cartoons, and behind-the-scenes "featurettes." It's a lovely set, and perfect for the completist.
Posted by JulieK at 1:50 PM

Email ThisBlogThis!Share to TwitterShare to FacebookShare to Pinterest
Labels: Fred Astaire, May 10