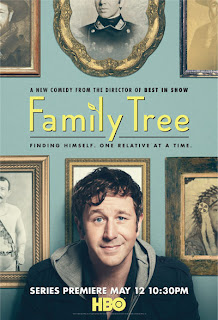 I'm always involved with Heartland Theatre Company's 10-minute play festival -- I sort of chair the committee and shepherd the judging process -- and this year more than usual because I'm (ahem) acting again. I can't quite believe it myself, but there you have it. If all goes well (and probably even if it doesn't) I will appear in two of the eight winning "Package Plays" that open on June 6.

Because the theme for this year's festival involves packages, parcels and presents, and because I traditionally tote up a list of what was written about, or for this year, what was inside all the packages conjured up by playwrights, I have been dealing with a whole lot of boxes, bags, bundles and whatever else somebody wrote about under that Package umbrella.

So imagine my surprise when I fell over a new HBO series, a series with my name written all over it, whose first episode is called "The Box."

The series itself is Family Tree and it started way back on May 12. Somehow I missed the news of its arrival, which is fairly shocking considering it comes from Christopher Guest, one of my favorite filmmakers. Guest created Family Tree with Jim Piddock, an English actor, writer and producer who appeared in Guest's For Your Consideration, the one about a modest movie about Purim that attracts Oscar buzz, A Mighty Wind, about a reunion of leftover folk singers, and Best in Show, the dog show mockumentary.

So Family Tree is about a guy named Tom Chadwick, played by Chris O'Dowd, who is probably best known for Bridesmaids, but was the fairly normal guy in cult sitcom The IT Crowd, as well. The premise of the first episode is that Tom's great-aunt dies, leaving behind... A box! Ta da! Piddock is there, too, as the "Bits and Bobs" man who gives him info on the age and usefulness of some of the objects in the box. His advice -- he says something like "I wouldn't put that in my mouth, Tommy. That's not a musical instrument, it's a Victorian dildo" -- is deadpan, amusing and very familiar in that improvised Guestian style.

The box episode of Family Tree also introduced us to Michael McKean, someone I absolutely love, as Tom's English dad, Nina Conti as his older sister, always seen with a monkey puppet on her hand because of a childhood trauma, and Tom Bennett as his best friend Pete. Ed Begley, Jr., Fred Willard and Don Lake are due to show up later. The second episode of Family Tree ("Treading the Boards") aired  May 19 on HBO, while "The Austerity Games" shows up June 2. You can watch the first two On Demand or with HBO Go right now, which is what I did, or look for them on the HBO schedule.

I love the tone, the idea of a search based on genealogical and identity issues, and the terrific cast. The Internet Movie Database tells us that the June 16 episode is "Coming to America," which I'm going to assume shows Tom Chadwick finding American relatives, the opposite of Christopher Guest finding his English roots (and title).

The tag line on the promo poster at the top tells us that Tom is Finding himself one relative at a time... And isn't that intriguing?
Posted by JulieK at 2:53 PM