The Elusive "You're a Stranger, Not My [fill in the blank]!" Movie

I seem to have a weakness for a certain kind of mystery plot, one that's a little hard to describe. Let's just start by calling it the "You're a stranger, not my [wife, brother, doctor, friend, uncle]!" plot, even though it's not always about a wife. It could be someone Anne Baxter doesn't recognize who says he's her brother, a doctor who claims James Garner has been in a coma for five years, or someone who tells Louis Jourdan that he isn't at all who he thinks he is. The key here is that the person in the middle is suddenly confronted with a world s/he knows isn't true. And what could be more terrifying than that? 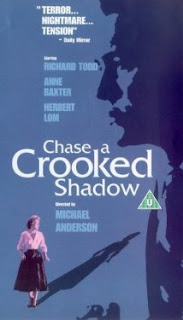 I was reminded of my fascination for this plot when Chase a Crooked Shadow showed up on Turner Classic Movies yesterday. I hadn't seen it before, but it's the first I know of in this specific subgenre. Anne Baxter appears as South African heiress Kimberly Prescott, returning to her lovely villa as she mourns the death of her brother a year before. But then a man who says he is that very brother shows up. And even though she knows it's not him, everybody around her says it is, and he has a passport and other identification to bolster his story and convince the local authorities. Anne Baxter was very good at that sort of conflicted, ambiguous heroine, while Richard Todd did very well as the superior and smug brother-who-wasn't-really. We know from the get-go it's a scam. The mystery is why these people are menacing Kimberly. Or who exactly is menacing whom? 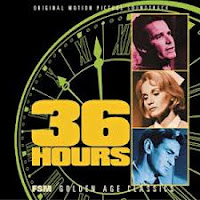 A wonderful example of the "You're a stranger, not my [fill in the blank]!" story is 36 Hours, a 1965 film in which Nazis try to convince American intelligence officer Jefferson Pike (James Garner) that it's 1949, not 1944, and that World War II is over, to try to get him to reveal Allied invasion plans. Eva Marie Saint is the alleged wife, in on the scam but warming up to her handsome faux-husband, while Rod Taylor is the bad guy trying to con his patient into giving away military secrets. 36 Hours is based on a true story, too, and it's quite tense and scary as Garner tries to figure out what's what and get himself out of there before the Nazis find out about Normandy beach, even though we all know how the war (and the D-Day invasion) turned out. 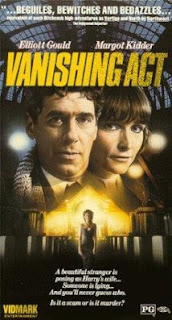 Less spy-riffic and more straight-out mystery, in the tradition of stageplays like Sleuth and Deathtrap, is a 1986 TV movie called Vanishing Act, where Harry Kenyon (played by Mike Farrell of M*A*S*H fame) claims his wife has disappeared. But then someone claiming to be her shows up, in the form of Margot Kidder. Who do we believe? And why would someone be pretending to be Mrs. Kenyon? Local cop Lieutenant Rudamayer (Elliot Gould) will surely get to the bottom of it. Vanishing Act is a lot of fun, based on the play Trap for a Single Man by Robert Thomas, who also wrote the screenplay. There's more humor here than the others, with enough clever twists and turns to keep it entertaining and involving.

But my absolute favorite -- and the only one without a poster as well as the only one not available on DVD -- is Run a Crooked Mile, another TV movie, this time from 1969. A man (played by suave French actor Louis Jourdan) witnesses a murder and then gets clonked on the head. When he wakes up, he is told that a) it is two years later, b) he's been in a coma since he had a polo accident, c) he is a different person than he thinks he is, and d) Mary Tyler Moore is his wife! I have to think the "crooked" in the title is a call-back to Chase a Crooked Shadow, and both films inhabit the same world of posh European society, but that's really where the similarities end. Crooked Mile is much more about unraveling the conspiracy, while Crooked Shadow is all about the cat-and-mouse game. TCM has a listing for Run a Crooked Mile, which gives me hope that they'll dig it out and show it sometime. In the meantime, it's supposedly on Youtube in ten parts, uploaded by some kindly fan who knew how many people were out there clamoring to see it again after all these years. I'm going to go  watch it now...
Posted by JulieK at 1:07 PM