LES GIRLS Is Just Too Too! 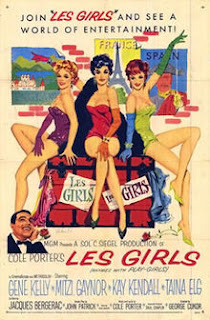 When Les Girls, a 1957 movie musical directed by George Cukor, came up on the Turner Classic Movies schedule, I realized I hadn't seen it since... Well, in a very long time. Whether it came up on my local Late, Late Show in 1966 or 1970 really doesn't matter. I did see it when I was young, even if I didn't remember much.What stuck with me was a) Gene Kelly as an entertainer taking his show on tour around Europe, b) Kay Kendall as one of the three women in his act, and c) big technicolor production numbers to show off a tuneful Cole Porter score.

And, yes, that's all still there. What I didn't remember was the Rashomon-style storyline, set into motion by a tell-all memoir written by Kendall's Lady Sybil. After she characterizes the romantic events that transpired during their show biz days in a rather lurid fashion, she ends up in court, sued for libel by Angèle Ducros, the French member of the trio, played by Finnish actress Taina Elg. (I knew Elg from her days as Olympia Buchanan, presumed dead wife of One Life to Live patriarch Asa Buchanan, as well as a stint as Guido's mother in Kopit and Yeston's Nine, which happens to be the first Broadway show I saw, with, yes, Elg in the cast. But I did not remember her from Les Girls at all.)

On the witness stand, Sybil stands pat with her story about an affair between Angèle and Kelly's Barry Nichols that ended badly, while Angèle says Sybil was the one involved with Barry. Oh, and she was a major lush to boot. To try to figure out who's telling the truth, Barry Nichols himself takes the stand, but his story... Doesn't accord with either of theirs. Instead, he matches himself with Joy Henderson, the American member of the female trio, played as a straight arrow/good girl by Mitzi Gaynor.

Each story involves singing and dancing with Gene Kelly front and center (of course) and some romantic hijinks. Even though that includes a suicide attempt, alcoholism and lying, the tone of the movie is silly and bright, befitting the Cole Porter score and such tunes as the cheeky "Ladies in Waiting," bouncy (and kind of crazy) "You're Just Too Too!" and "Why Am I So Gone (About the Gal)?," which attempts to cast Kelly as a motorcycle tough in a leather jacket. Yeah, that doesn't work. At all.

But the movie is a lot of fun, and Kay Kendall, a star who died much too young, is really quite adorable. Gaynor is also fun, even if she is MIA for the first 2/3 of the movie. And I admit it, the storyline hooked me enough to keep going to get to the end and find out "the truth." What is the truth? Les Girls doesn't really answer that question, and it never quite pulls off the mix of dark humor, sly innuendo and fizzy pop it's looking for.

Les Girls was Gene Kelly's last movie for MGM until he did That's Entertainment! in 1974. Kendall did only The Reluctant Debutante with husband Rex Harrison and Once More with Feeling after Les Girls. As a testament to Kelly at MGM and Kendall's career, Les Girls is certainly worth a look.
Posted by JulieK at 11:52 AM