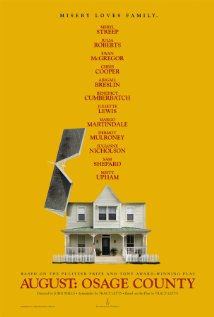 Tracy Letts' angsty family drama August: Osage County was a barnburner as a play, winning the 2008 Pulitzer Prize for Drama as well as six Joseph Jefferson Awards for the original Chicago production at Steppenwolf and five Tony Awards and a host of other prizes for the subsequent Broadway version. After all the acclaim, it was only a matter of time before Hollywood got ahold of the play and, well, Hollywoodized it.

With director John Wells (The Company Men) at the helm, August: Osage The Movie is gearing up, with a cast that includes Meryl Streep, Julia Roberts, Ewan McGregor, Chris Cooper, the man with the best name in entertainment history -- Benedict Cumberbatch -- and Mr. American Icon himself, Sam Shepard. 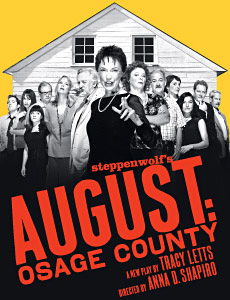 The movie isn't slated to be released till November, which is primo Oscar turf, but a trailer is already circulating on the internet. And creating speculation as to how exactly this star-studded movie version will resemble the play everybody loved so much. For one difference in tone, you can compare the movie poster above to the Broadway lobby card at right.

Doug George at the Chicago Tribune is worried that the trailer looks way too sweet and heartwarming to be the caustic August: Osage County that made such a splash, while Deadline calls it "cheery" and Margaret Lyons at Vulture thinks it has a "knowing quirk-factor" that doesn't really fit the play. You can judge for yourself by watching the trailer at any of those links.

If you'd like to keep track of who's been changed to whom from Broadway to Hollywood, here's a handy chart of the roles and who's playing what:

Feel free to read the play, create your own fantasy cast, and be all primed to compare/contrast by November.