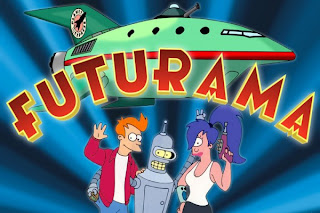 Please note that I'm spoiling the end of Futurama like crazy here, so if you haven't seen the last episode, go watch it and come back...

But what a lovely way to end the show. Again. The animated series had already come and gone once, so the second series finale had to be pretty special. And it was. I'm a sucker for the last episodes of TV shows, anyway, and I've watched a few for shows I didn't follow during the rest of their run. But Futurama... I admit I missed a few episodes over the years, but I had a fond spot for you, anyway, you crazy kids. And this second series finale went out with a bang -- or at least a broken universe -- as it tied up its stories, gave its central romance a fitting ending (and beginning), and hinted at the possibility of future adventures for all its animated characters.

These last episodes of Futurama have been both sentimental and sweet, as Fry revisited his mom back in the 20th century, at least in his dreams, Zoidberg got a girlfriend, and Fry proposed to Leela, but cynical and snarky, too, with an Agatha Christie/Alien mashup, Bender trying to give a tap-dancing rival a heart attack, and the whole Fry-breaks-the-universe thing in the finale.

That's been the joy of Futurama, the way it mixes sweetness and cynicism, yuks and intelligence (and Nixon's head in a glass jar) and makes you actually care about a bunch of two-dimensional cartoon people (and creatures). In the last episode, "Meanwhile," Fry steals the Professor's time-shifting machine, attempts to stop time to savor a moment with Leela, screws up big-time, and ends up freezing time for the entire universe, except for him and Leela. They have a whole lifetime together, roaming around everywhere they can think of, with the landscape and its people stuck in the moment Fry broke the time machine. But then Professor Farnsworth arrives as a deus ex machina to offer them the chance to go back to before he invented the machine. And that means we can imagine Fry and Leela and Amy and Zoidberg and Hermes and even nasty old Bender spinning into new intergalactic mischief and catastrophes. It's just that we won't get to see them.

Thanks, Matt Groening and David X. Cohen, the guys in charge, and Ken Keeler, the writer, for a really sweet finale and a definite lump in my throat. If you want to see and read more about the finale, you can find highlights and other goodies at Comedy Central and an enlightening interview with David X. Cohen at the AV Club. You can even get an app for your phone to create your own head in a jar. Or, if you prefer to wallow in grief like Forrest Wickman at Slate, well, there's that choice, too.